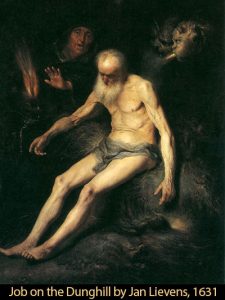 Last time we saw that Job is presented in the first verses of the prologue as both a faithful and a fruitful man. He behaves as a king, ruling over his garden very well, exactly like people were created to be. Job is also presented as a priest. He intercedes for his children as he “would rise early in the morning and offer burnt offerings according to the number of them all. For Job said, ‘It may be that my children have sinned, and cursed God in their hearts.’ Thus Job did continually.”

One of the most disappointing traditions of English Bible translation is the tendency to use the term “burnt offering.” The more accurate translation would be “ascension” offering. The Hebrew word does not mean “burnt,” rather, it means “to go up.” On a daily basis, early in the morning, Job would rise and offer offerings that go up or ascend. Yes, there was burning, but what went up was the smoke. The priest would cut the animal into particular pieces, arrange them on the altar, and subject them to fire, turning the animal into smoke. Quite literally, the animal ascended in smoke to the Lord. Leviticus tells us repeatedly that the smoke ascending to God is a soothing aroma to the Lord. This is how a worshiper could draw near to YWHW acceptably.

The symbolism of the ascension offering is hardly veiled: you can’t get there; you must have a substitute. The faithful Israelite would take an unblemished animal, lay hands on it saying something like, “This is me,” and then cut it up, place it on the altar, and watch the animal ascend to the presence of God in smoke. Job is doing this as he intercedes for his children. He’s saying something like, “God, I don’t know what my sons have been doing, saying, and entertaining in their hearts, but I’m putting them in line with you again.” Job is a good priest since guarding is a primary function of a priest; he is guarding them from their potential evil.

Satan, of course, seeks to rule the world through derailing our kingliness and priestliness. He did it with Adam, and now he’s doing it with Job. Yes, the situations aren’t exactly the same, but that’s what he’s up to. This is what he did with Jesus. Satan tried to tempt Jesus out of His kingliness and priestliness, but failed. Sonship is closely associated with those who remain allegiant to the Lord in spite of the attacks of Satan. Jesus is the Son of sons as He overcame everything.