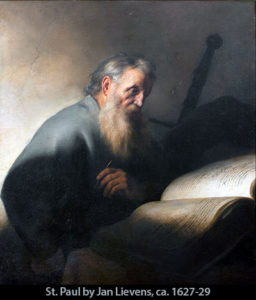 One who is taught the word must share all good things with the one who teaches.

Do not be deceived: God is not mocked, for whatever one sows, that will he also reap. For the one who sows to his own flesh will from the flesh reap corruption, but the one who sows to the Spirit will from the Spirit reap eternal life. And let us not grow weary of doing good, for in due season we will reap, if we do not give up. So then, as we have opportunity, let us do good to everyone, and especially to those who are of the household of faith. –Galatians 6:6-10

I enjoy learning about early American popular and folk songs. It seems as though we don’t have that shared tradition anymore, with the advent of recorded media. We no longer have to gather around a piano to sing if we want music. There’s a 19th century American song called The Dodger that goes through a number of professions (politician, farmer, lawyer, etc) and warns that each isn’t what he may seem. He’s actually trying to get something else he wants from you as he acts like he’s your friend, helper, or lover. The original context was that he was dodging the draft into the Civil War by getting enough money to pay for it. The song has a stanza that reveals that certain attitudes about preachers aren’t new. It goes like this:

In the Scripture passage copied above, Paul keenly speaks to the subject of money without ever mentioning the word. “One who is taught the word must share all good things with the one who teaches.”

Paul has a high view of the church. For him, it is the Kingdom of Christ on Earth, the house and family of God. For Paul, an “unchurched Christian” is an oxymoron. There’s simply no such thing. The church represents the new society of New Creation. As a result, he plants churches, pastors them, writes to them, ensures they have qualified leadership and so on. He’s not a missionary with the goal of getting people merely to believe something privately in their heart. Rather, his goal is to bring them together as a community that worships and bears one another’s burdens, i.e., building churches.

This costs money and Paul expects the people of the church to fund it. It is primarily given from the “One who is taught the word to the one who teaches.” He probably means a bit more by “the word” than the Bible alone. It includes the whole gospel of Jesus, rooted in the Old Testament and worked out through the apostolic teaching.

He supports it with a stern warning: “Do not be deceived: God is not mocked, for whatever one sows, that will he also reap. For the one who sows to his own flesh will from the flesh reap corruption, but the one who sows to the Spirit will from the Spirit reap eternal life.” The Judaizers have been focused on something very fleshly: circumcision. Paul has repeated the argument that if they accept it, everything about their faith and church will be ruined. Here Paul writes about practical support for the church but ties it in clearly with their current situation.

God won’t have people turning up their noses at Him: “Do not be deceived: God is not mocked.” Their behavior functions much like farming. You reap what you sow. Sow nettles and thistles, and that’s what you’ll get. Sow behavior that is fleshly, and that’s what you’ll get (death!). “But the one who sows to the Spirit will from the Spirit reap eternal life.” Eternal life is life in the New Age that has already broken in, in Jesus, and will one day be complete. Let’s sow to that.