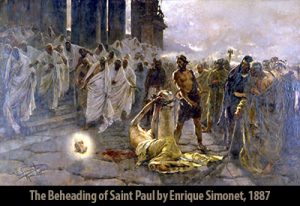 Grace to you and peace from God our Father and the Lord Jesus Christ, who gave himself for our sins to deliver us from the present evil age, according to the will of our God and Father, to whom be the glory forever and ever. Amen.

I am astonished that you are so quickly deserting him who called you in the grace of Christ and are turning to a different gospel– not that there is another one, but there are some who trouble you and want to distort the gospel of Christ. But even if we or an angel from heaven should preach to you a gospel contrary to the one we preached to you, let him be accursed. As we have said before, so now I say again: If anyone is preaching to you a gospel contrary to the one you received, let him be accursed. – Galatians 1:1-9

We come to our last week in the sermon series through the letter of Galatians. Below is what I wrote the first week. Does it make more sense now?

I lived for a couple of years in Macon, Georgia. I met some fine people there. With a city charter in 1823, it’s nearly 100 years older than Oklahoma. This antebellum town was mostly spared from Sherman’s torch. That preserved many interesting historical things to see. I hadn’t lived there very long when little oddities began to catch my eye, such as a water fountain and another one like it some distance away, or at least evidence that another one formerly had been there. I noticed the same with restrooms, entrances, places to sit in churches(!), and so on. In some cases, these separate-but-not-equal constructions had been preserved, while others had been faintly changed. What had not been erased was the grandiose train station (now an event center), where there was carved in the stone on one side: “Colored Waiting Room.” This “room” was covered, but not enclosed. It had functioned that way until 1960.

Imagine if you had gone to Macon in, say, 1940 and begun construction on a building where everyone, black and white and any other variety, could come and enjoy food, drink, help, conversation, education, singing, prayer, and mutual fellowship all together without respect to race, gender, or social class. With a good number of people behind you on this, it became a movement of good news. A growing number of people were helping get this place built. The mission seemed solid enough that you decided to go do it in another state where they hadn’t yet heard about such a wonderful thing.

After you had spent some time in the next state, you received word that back in Macon, some people had come in and said, “No, no, that guy (you!) brought this crazy concept of unity here, but that’s ridiculous. You know how it’s been from the beginning and what works and keeps the peace. We need to alter construction on this building to separate people again. After all, that guy (you!) acted like he was sent here from God, but, please, it’s not like he was an emissary from Washington or something!” And many people were persuaded by these detractors and abandoned your original vision no longer to divide along the lines of gender, race, and social class. How would you feel?

I think you’d feel like Paul. He establishes that he wasn’t sent to Galatia (central Turkey today) by men, “but through Jesus Christ and God the Father, who raised him from the dead.” And you might be astonished that the good news of deliverance “from the present evil age, according to the will of our God and Father” had been so quickly deserted. His message to them is clear and pointed, “But even if we or an angel from heaven should preach to you a gospel contrary to the one we preached to you, let him be accursed.”

Is the illustration here to the point or a little off? I believe we will find in the book of Galatians that it is spot-on. The good news (the gospel) Paul speaks of is not precisely a system of salvation or a new way of living religiously. The gospel that Paul brought to the Galatians that some were distorting was the announcement that Jesus, the crucified Messiah, is exalted as Lord of the whole world; therefore, He calls into existence a single, worldwide family. If you’re preaching something contrary to that, may you be accursed.