May 6: The Sixth Sunday of Easter 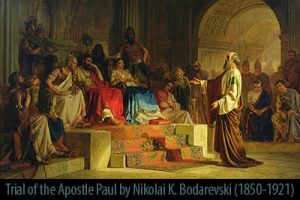 You were running well. Who hindered you from obeying the truth? This persuasion is not from him who calls you. A little leaven leavens the whole lump. I have confidence in the Lord that you will take no other view than mine, and the one who is troubling you will bear the penalty, whoever he is. But if I, brothers, still preach circumcision, why am I still being persecuted? In that case the offense of the cross has been removed. I wish those who unsettle you would emasculate themselves! –Galatians 5:7-12

Much like surfing through a variety of channels on television, Paul covers several channels in this little passage: sports program (“running well”), courtroom drama (“persuasion”), cooking show (“leaven”), prayer hour (“I have confidence”), back to another courtroom (“bear the penalty”), biography channel (“Why am I?”), history channel (“the cross”), and finally an uncensored reality show (“I wish those would emasculate themselves!). Paul was certainly in no way boring.

Let’s skip a few channels to the cooking show. Seemingly out of nowhere, Paul throws in a statement that many have found pithy and applied to various circumstances: “A little leaven leavens the whole lump.” One commonly held myth is that leaven is yeast. Yeast is one thing, but leaven in biblical times was simply a sourdough starter; it was a piece from yesterday’s bread to get fermentation going in today’s bread. It is small but powerful. If you’re making a loaf of bread, you need leaven so it will rise, but only a few grains of the starter will do for the entire load. If you put in those few grains, the result is not that part of the loaf is leavened and part isn’t. Amazingly, the leaven will work its way swiftly through the whole loaf.

A person who is even mildly biblically literate knows about the Jewish tradition of keeping Passover with unleavened bread. This recalls the Israelite’s swift departure from Egypt. Leaven was banned from Jewish kitchens at Passover time. It was associated with sin and compromise. This was described as “leavening the lump.” Paul’s opponents are saying that circumcision is required of the Gentile believers. Paul is saying that if the Galatians compromise on this one thing (circumcision), they can’t have that isolated part of their lives leavened, but not the other parts. No, “A little leaven leavens the whole lump.” With one little blemish, it’s all ruined.

And Paul feels so strongly about this that he offers an exasperated conclusion: “I wish those who unsettle you would emasculate themselves!” That’s because of an interesting word in the sentence just before. “…the offense of the cross has been removed.” Is the cross supposed to be an “offense”? According to Paul, yes. The Judaizers want to remove the “offense” of the cross. The Greek word translated offense is the word from which we get the English word scandal. In fact, the Greek word even sounds like “scandal.” The Judaizers are scandalized by the cross because it tramples on their boast. The cross means they are not superior to everyone else because of their ancestry. They want to be made much of, but the cross is a stumbling block to that.

For them, Paul has this sharp and shocking word. They say a little leaven is okay. Paul says a little leaven contaminates and forever changes the whole loaf. In the same way, a little circumcision may seem okay, especially as it takes away the offense or scandal of the cross. But you might as well not stop with circumcision but keep cutting until it’s all gone. This also speaks somewhat symbolically of the future. The people troubling the Galatians will lose their power and no longer be able to propagate their ideas.

The cross has a wonderful scandal to it that we must never remove. In Christ there is no race, gender, or social class difference. All are one in Him. And that’s the gospel.