April 8: The Second Sunday of Easter 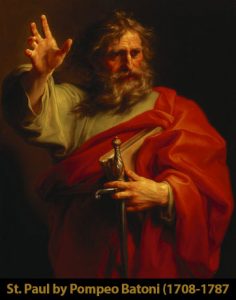 Formerly, when you did not know God, you were enslaved to those that by nature are not gods. But now that you have come to know God, or rather to be known by God, how can you turn back again to the weak and worthless elementary principles of the world, whose slaves you want to be once more? You observe days and months and seasons and years! I am afraid I may have labored over you in vain. –Galatians 4:8-11

As we’ve seen up to this point in Galatians, there was a real danger of the Gentile Christians falling for the false teaching that they had to become Jewish (by circumcision) before they could be full members of God’s family. Paul has pointed out that the promise to Abraham was that he would be “the father of many Gentiles.” Paul has taught how the law was a kind of quarantine or guardian babysitter from Moses to Jesus, which didn’t change God’s promise to Abraham at all. There is an overlapping story of Gentile slavery to the “elementary principles of the world” with the Jewish slavery to the law. They had come from slavery to freedom in Jesus Christ. Who would want to go back?

Well, this isn’t the first occurrence of someone recently emancipated who gets anxious about freedom and starts wanting to go back. The children of Israel faced a similar situation with Moses after leaving slavery in Egypt. When they didn’t know where their next meal was coming from, they thought enslavement in Egypt didn’t sound so bad after all. Sometimes they even plotted to elect a different leader so they could go back! Paul recollects this story when he writes in the passage above, “…how can you turn back again to the weak and worthless elementary principles of the world, whose slaves you want to be once more?”

He goes on, “You observe days and months and seasons and years!” Not only were they considering (or perhaps some had already submitted to) circumcision, but the law’s defunct festivals and holidays were being resurrected as well. It would be a mistake, however, to take this as an indictment against Christians celebrating or marking time by biblical and theological events. Paul says that the first day of the week is special (1 Cor. 16:2). Obviously, the early Christians met on what they called “the Lord’s Day” (Rev. 1:10). You even see that Easter becomes an annual festival, and many in the church (Paul included) date what they are doing by reference to Passover and Pentecost (Acts 20:6, 16; 1 Cor. 16:8). Not all observances of days and times are banned. But, Paul says in Romans 14:5-6 that doing so–or not doing so–is a personal matter of discipleship.

So, what is he talking about? The Galatians were trying to keep Jewish festivals. The problem is that those festivals, by design, looked forward to the great act of redemption that the Father would accomplish in Jesus Messiah. If God’s future has already arrived, what would it mean if they went back to the form of things that anticipated this future? Frighteningly it means that they were saying they weren’t really sure that God had done in Jesus what had been preached. The content of the gospel is that He has! Thus, harsh as it may sound, Paul says in exasperation, “I am afraid I may have labored over you in vain.”

Let us remember that the elementary principles and other gods continually whisper sweet invitations to us so that we can fit better socially, be richer, or be happier if we’ll come back. This is a lie, and falling for it enslaves you. It is only when we follow the God revealed in Jesus and the Spirit that we find true freedom, true humanness, and true fellowship with other people. God has acted, and we have tasted the effect of that action. All His promises are “Yes!” in Jesus.

And that’s the gospel. Come hear it preached and enacted in the Supper this Sunday.