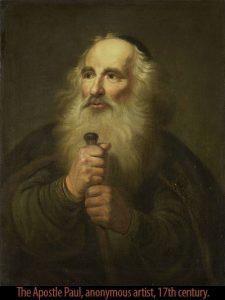 Tell me, you who desire to be under the law, do you not listen to the law? For it is written that Abraham had two sons, one by a slave woman and one by a free woman. But the son of the slave was born according to the flesh, while the son of the free woman was born through promise. Now this may be interpreted allegorically: these women are two covenants. One is from Mount Sinai, bearing children for slavery; she is Hagar. Now Hagar is Mount Sinai in Arabia; she corresponds to the present Jerusalem, for she is in slavery with her children. But the Jerusalem above is free, and she is our mother. For it is written, “Rejoice, O barren one who does not bear; break forth and cry aloud, you who are not in labor! For the children of the desolate one will be more than those of the one who has a husband.” Now you, brothers, like Isaac, are children of promise. But just as at that time he who was born according to the flesh persecuted him who was born according to the Spirit, so also it is now. But what does the Scripture say? “Cast out the slave woman and her son, for the son of the slave woman shall not inherit with the son of the free woman.” So, brothers, we are not children of the slave but of the free woman. –Galatians 4:21-31

We’ve seen so far that the Apostle Paul and the Judaizers in the Galatian churches have competing stories of what the Bible says. For the Judaizers, the story has the Jewish law on their side. In that story, if people want to become proper children of Abraham, part of God’s true people, then they must follow the law, which includes being circumcised. They make a distinction, especially between races.

Paul has a different story, and his credentials in the law are impressive. He knows that the Pentateuch (the first 5 books of the Bible) tells a different story when read properly. In order to convey this, he recalls and explains one of the unhappiest episodes of Genesis. It’s a story of faithlessness and generational conflict.

Abraham had a wife and a concubine. Sarah (the wife) suggested that since she didn’t yet have a child to be the heir, Abraham could simply have a child by Hagar (the concubine). What a disaster! They went through with it: Hagar had Ishmael, and she celebrated her superior position. Sarah, in turn, mistreated Hagar. Sarah did eventually become pregnant with the true heir, Isaac. Ishmael became the father of the Arabs, and Isaac was the father of Jacob and Esau, hence of Israel as a whole.

Much could be said about the details of that mess, but Paul assumes that the reader knows the story, and he interprets it. The Judaizers want to say that there are two families and Paul says there is one. Paul shows what two families would be like. The Ishmael-family, who is “the son of the slave” “born according to the flesh,” is obviously not what you’d want as your side of things! The Isaac-family is the one who “was born through promise.”

Paul has previously shown that the law, given on Sinai, was like a slave-guardian during the time from Moses to Messiah. The reader is to understand that the law, by itself, produces Ishmael-children (slaves) rather than Isaac-children (free). This brings a whole new dimension to these competing stories. Paul further elaborates by comparing promise (freedom) to flesh (slavery), the Jerusalem above (freedom) to the Jerusalem below (slavery), thus the Galatian Christians (persecuted) to the Judaizers (persecutors).