July 10: The Eighth Sunday after Pentecost 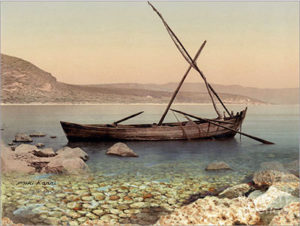 The Pharisees came and began to argue with him, seeking from him a sign from heaven to test him. And he sighed deeply in his spirit and said, “Why does this generation seek a sign? Truly, I say to you, no sign will be given to this generation.” And he left them, got into the boat again, and went to the other side.

The Pharisees don’t understand. Of course if they understood, then they’d repent of their traditions and follow Jesus. Do we have some traditions of which we need to repent? Just asking.

Jesus has done amazing signs. It must have been in their day like movies and miracle plays today, but the Pharisees come asking for yet another sign. This is proof, of course, that signs and wonders are not sufficient to heal the human heart or even open spiritually blind eyes. Jesus flatly refuses their request, condemns them along with the generation they represent, then He up and leaves them standing there, unsuccessful in their endeavor.

The passage that follows this one is the miracle healing of the blind man. The Pharisees and the generation they represent suffer blindness. Jesus must restore Israel’s sight if they are ever going to see. The healing miracle before this passage was with the deaf mute. Jesus said that the scribes in chapter 7, “honor [God] with their lips, but their heart is far from [Him],” and they “revile” or “speak evil.” We see Jesus diagnosing these maladies with the spiritual manifesting the physical and correcting them symbolically. But certainly the scribes and Pharisees don’t get it. We should be struck with the fact that the disciples don’t really get it either!

Jesus is revealing the answers in this passage, except, as the Good Teacher He is, not all at once. The work it takes to get the right answer is a big part of His teaching method. He does tell them plainly to “Watch out; beware of the leaven of the Pharisees and the leaven of Herod.” It would seem at first blush that the Pharisees and Herod would not be lumped together very often. But here they go together perfectly because they each have a kingdom-vision for the future that involves political power. The Pharisees want a kingdom of powerful Jews who can observe the traditions with great strictness while stomping on everyone else. Herod wants a powerful royal family as the true king of Israel. “This generation” is led astray by both Pharisees and Herod. Jesus’ kingdom-vision is completely different and gives life for the world.

Additionally, we find here the third boat-ride incident. Like the others, there is confusion, although this one doesn’t have bad weather like the other two. Interestingly, Jesus quotes from Jeremiah 5:21, “Hear this, O foolish and senseless people, who have eyes, but see not, who have ears, but hear not.” If you know the chapter, you know that Jeremiah also includes a reference to Israel’s inability to understand God’s power over the sea and over the weather. This theme of God’s power over the sea remains prominent because the sea is used as a symbol to reveal the hardness of the disciples’ hearts. And let us consider well and bear in mind that the One who has power over the sea also has power to take hard hearts of stone, full of misunderstanding, and make them soft hearts of flesh who can discern the truth. And that’s the gospel!