November 15: The Twenty-fifth Sunday after Pentecost 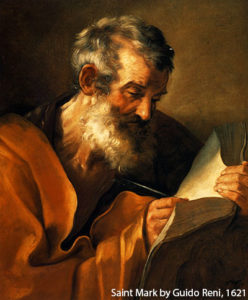 The beginning of the gospel of Jesus Christ, the Son of God. – Mark 1:1

As we begin a sermon series in the book of Mark, there are so many great things I want to tell you about. I confess that in the past, although I would never have said it out loud, I’ve believed that Mark was somehow of lesser importance because it is the shortest. It has no narrative of Jesus’ birth. Mark covers Jesus born, baptized, tempted, and calling disciples before he is half-way through the first chapter! One of Mark’s favorite words is “immediately” (used 35 times, 9 times in chapter 1 alone). Whereas Matthew presents Jesus as a new Moses, the rabbi or teacher, who goes about using intellectual challenges to the original audience’s interpretation and use of the OT Scriptures, Mark characterizes Jesus as a man of action on the move. For Mark, Jesus is a new David, the shepherd-warrior-king.

So, my previous error of slighting the book of Mark has been corrected. Mark is an essential component to our understanding of who Jesus is and even to what the gospel itself means. Speaking of that, did you notice the first verse of the book copied above? What a great first line! The beginning of the gospel of Jesus Christ, the Son of God. There are several sermons that could be preached just from that sentence. Why does Mark use the word “beginning” or “Christ” or “Son of God”? He’s not liberal with word selection, so there is great meaning behind each one.

I think it’s important not to take the word “gospel” too lightly. What is the gospel? That’s a good question, and a question I think more people who frequently use the word ought to ask. Since the Newer Testament wasn’t written at the time Mark was writing this gospel (probably late 40s-early 50s), we would need to see how it is used both in the Older Testament and in the pagan world at the time of Mark’s writing.

Then if we look in the OT, we find the word in Isaiah 40:9 and 52:7. Both of these texts concern the return of God’s people from exile where God will dwell again with them. That’s in Jerusalem in the Temple. We find it earlier in 1 Kings and 1 Chronicles to refer to the construction of both God’s “temple” and Solomon’s kingly “palace.” We can draw from this the same meaning as the pagan usage: it is an announcement of the victory or ascension of a king.

That lets us in on more of what Mark is saying than might initially meet the eye. When we think of “gospel,” we tend to think of forgiven individuals and changed lives. Maybe we’ve grown a bit and thought of the gospel as the announcement of what Jesus has done for us. That’s good and ought to be preached, but let’s be clear here that Mark’s use of the word is less about getting a “personal relationship” with God and more about announcing that a new King is acceding to His throne. He will conquer his enemies, and they should tremble in fear. For those who want to live under His reign, our knees must bow in submission to His royal (Davidic!) authority. That’s what Mark is introducing: the conquest and victory of a new King of kings. And that’s the gospel!