March 11: The Fourth Sunday in Lent 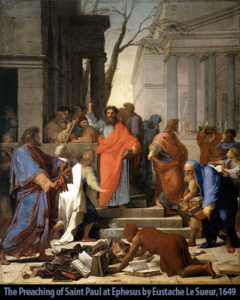 To give a human example, brothers: even with a man-made covenant, no one annuls it or adds to it once it has been ratified. Now the promises were made to Abraham and to his offspring. It does not say, “And to offsprings,” referring to many, but referring to one, “And to your offspring,” who is Christ. This is what I mean: the law, which came 430 years afterward, does not annul a covenant previously ratified by God, so as to make the promise void. For if the inheritance comes by the law, it no longer comes by promise; but God gave it to Abraham by a promise. – Galatians 3:15-18

The You-Troublers of Galatia have been making a point that Gentiles need to be circumcised and probably observe a lot of other parts of the law. Perhaps they referred to Jesus speaking to the Samaritan woman in John 4, “Salvation is of the Jews.” The of-ness of that salvation has to do with the whole complex of things that marked out God’s people. We know that Jesus was not saying that it’s exclusively for the Jews, but everybody knew that Gentiles had to join the Jewish community first for God’s salvation, and that meant the males were circumcised. The goyim (the non-Jews) had to exercise saving faith to enter God’s covenant community and the sign of the covenant was circumcision.

Circumcision had been introduced in Genesis 17 in the story of Abraham, and God called the ritual itself “my covenant,” and said that it was to be practiced “throughout your generations.” We don’t know exactly what the You-Troublers were saying, but they may have been making a similar biblical defense. To say that Gentiles have always been saved by receiving the sign of God’s covenant, and with Jesus saying salvation is of the Jews, they knew they were the new covenant community, so shouldn’t all these Gentiles enter the covenant the obvious way? Did God ever say, “Okay, stop doing that now”?

What the Judaizers were likely saying looks like a biblical interpretation, with apparent loyalty both to the heritage of the Abrahamic promises and to the advent of Jesus the Messiah. Are you convinced? I hope not. This is precisely what Paul called “a different gospel.”

In the Galatians passage above, Paul debunks their argument as one that tries to smuggle in an agenda (a strong ethnic Israel in the church with Gentiles being, at best, second class). But let’s be clear: God has a purpose and that isn’t it! Paul’s counter-argument is that you have to look at the original covenant for the answer, and understand the purpose of the law properly.

What was God’s original covenantal intention? That Abraham would have a single, worldwide family. This family would consist of people not defined by ethnicity, but of faith. He’s covered this before by referring to Genesis 12 and 15, but explores now what it means in practice.

God has made promises “to Abraham and to his family.” The whole point is that family (singular) and not families (plural), but singular because this “seed” is Messiah. For Paul, Messiah represents God’s people, so that the “singular seed” means that single family incorporated into the Messiah, as God always intended: “Even with a man-made covenant, no one annuls it or adds to it once it has been ratified.” This is the promise, and it came 430 years before the law, but the law “does not annul a covenant previously ratified by God, so as to make the promise void.”

This tells us the law has some other purpose, and that purpose doesn’t change God’s promise one whit. Paul calls it “the inheritance.” What is “the inheritance?” It is all the benefits of God’s singular family in Jesus Messiah. Come hear it preached and enacted in the supper with Jesus this Sunday.