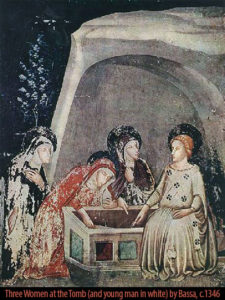 When the Sabbath was past, Mary Magdalene and Mary the mother of James and Salome bought spices, so that they might go and anoint him. And very early on the first day of the week, when the sun had risen, they went to the tomb. And they were saying to one another, “Who will roll away the stone for us from the entrance of the tomb?” And looking up, they saw that the stone had been rolled back–it was very large. And entering the tomb, they saw a young man sitting on the right side, dressed in a white robe, and they were alarmed. And he said to them, “Do not be alarmed. You seek Jesus of Nazareth, who was crucified. He has risen; he is not here. See the place where they laid him. But go, tell his disciples and Peter that he is going before you to Galilee. There you will see him, just as he told you.” And they went out and fled from the tomb, for trembling and astonishment had seized them, and they said nothing to anyone, for they were afraid. –Mark 16:1-8

In Jesus’ day, the typical burial practice was a two-stage process. First, the body was wrapped up and covered with spices to help with the smell of decomposition, and then it was laid on a shelf in a small cave. The cave was often dug out, or man-made. There might be several shelves in the cave for several bodies simultaneously. After a year or two the flesh would have decomposed, and the bones were gathered and placed in an ossuary, which was stored on another shelf, sometimes in the same cave.

In the passage from Mark’s Gospel, we saw the first part of the process of laying out Jesus’ wrapped body for decomposition. Our brother, Joseph of Arimathea, had wrapped Jesus in a linen cloth and laid Him in the tomb, presumably to be returned to a year or two later so the bones could be placed in an ossuary. Two of the three women mentioned above had seen this. Perhaps because the beginning of Sabbath was looming, there wasn’t time to cover the body with spices.

Mark indicates that they bought spices “when the Sabbath was past,” which would have been after sundown Saturday evening. They have come now, early on Sunday morning, the first day of the work week, to apply those spices. They know about the massive stone, and you can tell that they are worried about moving it. “And they were saying to one another, ‘Who will roll away the stone for us from the entrance of the tomb?’” It was big—maybe too big for them to move. Still, they pressed on.

And then, surprise, it was already rolled back! Mark’s description of the angel as “a young man sitting on the right side, dressed in a white robe” is curiously similar to the “young man with nothing but a linen cloth about his body” from the Garden of Gethsemane. Whatever else that might mean, there is no doubt that it was alarming to the women. The angel even says, “Do not be alarmed. You seek Jesus of Nazareth, who was crucified. He has risen; he is not here. See the place where they laid him.”

If this book were a piece of pious fiction that early Christians had made up, most likely the women would have been anxiously hurrying to find the empty tomb; but Mark leaves no doubt that they fully expected to find the tomb quite occupied by Jesus’ body. This was the first of the two stages of preparing the body for decomposition. But let the good news go forth: there was no opportunity for the second stage of collecting Jesus’ bones. He was no longer there. And that’s the gospel.