December 31: The First Sunday after Christmas 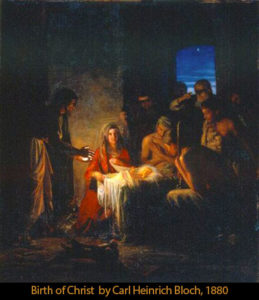 Now before faith came, we were held captive under the law, imprisoned until the coming faith would be revealed. So then, the law was our guardian until Christ came, in order that we might be justified by faith. But now that faith has come, we are no longer under a guardian,

In the same way we also, when we were children, were enslaved to the elementary principles of the world. But when the fullness of time had come, God sent forth his Son, born of woman, born under the law, to redeem those who were under the law, so that we might receive adoption as sons. And because you are sons, God has sent the Spirit of his Son into our hearts, crying, “Abba! Father!” So you are no longer a slave, but a son, and if a son, then an heir through God. – Galatians 3:23-25; 4:4-7

The Lectionary’s epistle reading for the first Sunday of Christmas is copied above. If I asked you where to find the Christmas passage in Galatians, you’d probably have to rack your brain to think of what that is, but once you’ve read this passage from Galatians 3 and 4 in light of Christmas, you’ve found the answer.

The Apostle Paul’s picture or idea of the law in Israel’s story here is of a babysitter or, in the Roman historic context, a slave who protects the household’s children and ensures their schooling. His point is that between the time of Moses and the coming of Messiah, Israel was a child needing special guidance. Children eventually grow up and don’t need a babysitter anymore, so Paul is claiming (and this goes for the whole of letter to the Galatians) that the coming of Messiah means Israel has at last grown up. With this maturity comes trustworthiness or faithfulness, translated above simply as faith, but it would be a perfectly good translation to say, “Now before faithfulness came, we were held captive under the law, imprisoned until the coming faithfulness would be revealed.” Put another way, the faithfulness of the Messiah is the sign that Israel’s maturity has been reached and God’s promises are coming to fulfillment.

From here, Paul inserts some very important things about baptism, but to keep the argument together we’ll not cover those verses now. He picks up with, “In the same way we also, when we were children, were enslaved to the elementary principles of the world.” Then he goes on to use Exodus-type language. God called Moses to lead Israel out of slavery in Egypt into the Promised Land, which is freedom. They were enslaved for a long time until God sent Moses to redeem them. This is revealed when Moses said to Pharaoh, “Israel is my son, my firstborn.”

Freedom came through Passover with its sacrifices. Then 40 days after Passover, they came to Sinai and were given the law as their guide through the wilderness to their inheritance. For Paul, this was seen as better than being enslaved to the Egyptians, but still bondage to a guardian babysitter: the law. This prevented, for a time, the fulfilment of God’s full-blown intention of freedom and living life as it was meant to be before sin.

Nonetheless, “when the fullness of time had come” there is a new Passover, but it was not Moses who was sent, but God’s own son, Jesus the Messiah. He would purchase these slaves so that they would become true children. And if that weren’t enough, 40 days after Passover, on the feast of Pentecost, God gave something from above again. This time it wasn’t the law, but “God sent the Spirit of his Son into our hearts, crying, ‘Abba! Father!’” That means that the evidence that the Spirit has been at work is the prayer which arises in our hearts. This prayer is the prayer of Jesus calling out using the term of intimacy and familiarity that even an adult would use of a beloved father: “Abba.” How come? Because the slaves under the law have become not just free, but “an heir through God.” And that’s the gospel!