December 17: The Third Sunday of Advent 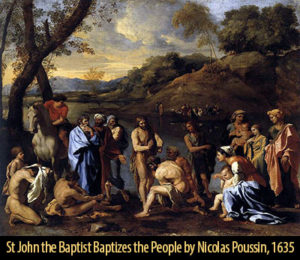 And this is the testimony of John, when the Jews sent priests and Levites from Jerusalem to ask him, “Who are you?” He confessed, and did not deny, but confessed, “I am not the Christ.” And they asked him, “What then? Are you Elijah?” He said, “I am not.” “Are you the Prophet?” And he answered, “No.” So they said to him, “Who are you? We need to give an answer to those who sent us. What do you say about yourself?” He said, “I am the voice of one crying out in the wilderness, ‘Make straight the way of the Lord,’ as the prophet Isaiah said.” –John 1:6-8, 19-23

This is the third Sunday of Advent of this church year, and the lectionary reading is the passage copied above. John the baptizer occupies a major, though mysterious, place in the gospels and the history of Christianity. We know he’s a major character because all four gospel writers tell of him (including a full birth narrative in Luke!), and he attracts the attention of everyone from the peasant to the most powerful in Israel. He’s mysterious because everyone seems to get him wrong.

He’s not like most people who rise in popularity. He gains the public eye, attracts quite a large following, but then refuses to claim even one of the offices, identities, or honors they want to ascribe to him. The expectation that Messiah would come was high. With the atrocities and insults against the Jews through the Syrian era, the Maccabean era, and now the Roman era, in just the last 200 years, a king from the house of David that would overthrow all injustice and rule over Israel sounded just about right. However, “He confessed, and did not deny, but confessed, ‘I am not the Christ.’”

“And they asked him, ‘What then? Are you Elijah?’” The prophet Elijah occupies a huge place in Jewish hope. He didn’t die in the ordinary way, but was taken up in a chariot of fire. It was hoped, then, that he would return and usher in God’s new day. While John the evangelist doesn’t tell us here, other gospel writers speak of John the baptizer as wearing a leather belt, which was just like Elijah. In Mark 9, Jesus tells the disciples that Elijah has, in fact, come, though he was referring figuratively to John the baptizer. In other words, there was truth to the suspicion that John the baptizer is Elijah, which Jesus Himself acknowledges in a figurative sense. Nonetheless, John answers plainly, “‘I am not.’”

Then they ask about the greatest of all prophets. This hallowed figure was shockingly suspected to be Jesus. At the miracle of the loaves and fishes, the people who saw the sign said, “This is indeed the Prophet who is to come into the world!” What prophet is greater than Elijah? Moses. It doesn’t seem that they particularly expected Moses like Elijah, but since John said he wasn’t Elijah, they wondered if he was perhaps the biggest of them all: “‘Are you the Prophet?’ And he answered, ‘No.’”

The Temple officials came out to see who this prophet was, without their approval, preaching a message from God. It was strange as he was having people kneel in the water and pouring water over their heads like a ceremonial cleansing. But when they tried to nail him down, trap him, or whatever it was they had in mind, he pointed completely away from himself, “I am the voice of one crying out in the wilderness.” It must have been a little disappointing for them. He was saying it wasn’t even about him anyway. The drama of the whole thing just fizzled.

We know the answer. And that’s the gospel.