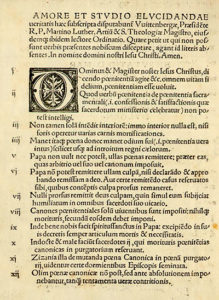 “When our Lord and Master Jesus Christ said, ‘Repent’ (Mt. 4:17), he willed the entire life of believers to be one of repentance.” –Martin Luther, 95 Theses, Number 1

October 31, 1517, just about 500 years ago exactly, the Reverend Father Martin Luther, Master of Arts and Sacred Theology, and ordinary lecturer therein at Wittenberg posted (in Latin) the thesis copied above (in English) along with 94 more of them. He provided an introduction “…to defend the following statements and to dispute on them in that place. Therefore he asks that those who cannot be present and dispute with him orally shall do so in their absence by letter.” It began small, but eventually brought about quite a furor in Wittenberg, in all Germany and Europe, and unto the uttermost part of the Earth.

Luther was not attempting to repeal or replace the Roman Church. Rather than repeal or replace, he hoped, as he said, “Out of love for the truth and from desire to elucidate it,” to reform the Roman Church especially regarding the abuse of the “power and efficacy of indulgences.” He was concerned that church authority had gone too far afield of the Bible. He is called a “reformer” since that is what he meant to do. Peter Waldo (c. 1140-c. 1205, France), John Wycliffe (1320s-1384, England), Jan Hus (1369-1415, today’s Czech Republic), and numerous others all preceded Luther in bold attempts to reform the Roman Church, but, largely due to the invention of the printing press, nobody had an impact like Luther’s.

Since Jacob Arminius was only 3 years old when John Calvin died, if you could wake Calvin from the dead, he would not be able to answer the question, “What are the five points of Calvinism?” This causes me to wonder if Luther would recognize Reformed or Lutheran churches today. I seriously doubt that the virtually uncountable specialized splinters and brands of Protestant churches today was anything like what he had in mind. On the contrary, I think he would be horrified. Everyone is doing what seems right in his own eyes.

So, realizing that reformation is every bit as needed today, in the spirit of Luther and the 95 Theses, I offer just 3 theses to consider in our times:

That said, let us be exceedingly thankful for Luther’s contribution and what God did through him. It seems that most of the time, the doctrine of justification by faith alone is the main recovery attributed to Luther. No doubt, it is significant and precious. But I would suggest that it is his recovery of the Bible as the true authority that leads the way.

As Beeson Divinity School professor Timothy George has written, “For Luther, the church does not take priority over the Bible; instead, the church is the creation of the Bible. It is born in the womb of Scripture. ‘For who begets his own parent?’ Luther asked. ‘Who first brings forth his own maker?’ Luther held a high view of the inspiration of the Bible, calling it once ‘the Holy Spirit book.’ But what truly distinguished his exegesis was his ability to make the text come alive. For him, Bible stories were not distant historical acts but living current events, as we see in his treatment of Gideon: ‘How difficult it was for [Gideon] to fight the enemy at those odds. If I had been there, I would have messed in my breeches for fright!’ Thus, for Luther, the Bible is no mere depository of doctrine. In it, a living God confronts his people.”

That’s the kind of belief that caused another Roman Churchman to say Martin Luther was a “demon in the appearance of a man.” It’s also the kind of belief that caused the Reverend Father Martin Luther to say, “If you try to deal with sin in your conscience, let it remain there, and continue to look at it in your heart, your sins will become too strong for you. They will seem to live forever. But when you think of your sins as being on Christ and boldly believe that he conquered them through his resurrection, then they are dead and gone. Sin can’t remain on Christ. His resurrection swallowed up sin.”