June 25: The Third Sunday after Pentecost 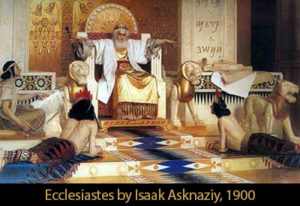 Better was a poor and wise youth than an old and foolish king who no longer knew how to take advice. For he went from prison to the throne, though in his own kingdom he had been born poor. I saw all the living who move about under the sun, along with that youth who was to stand in the king’s place. 16 There was no end of all the people, all of whom he led. Yet those who come later will not rejoice in him. Surely this also is a vapor and shepherding wind. – Ecclesiastes 4:13-16

Then Solomon ends with the verses above. It seems a little enigmatic and is, perhaps, one of the “dark sayings” he speaks of in Proverbs. It is most certainly a warning. This warning is especially to leaders like politicians, businessmen, or pastors. One of the pitfalls for leaders is becoming isolated or too confident for sound advice. Without a real community of peers, things can go foolish in a hurry!

The two character examples are “a poor and wise youth” and an “old and foolish king.” They each, perhaps, had Warhol’s proverbial “fifteen minutes of fame.” The old and foolish king grew rigid and unwilling to seek counsel. A poor and wise youth replaced him. While he doubtless enjoyed his fifteen minutes of fame, the truth is that he really wasn’t up to the task. He lacked maturity (remember the kingly purpose of wisdom literature!) and training. He had not been born to kingly riches and most recently had been in something like a prison—certainly not a palace.

The king had been popular, but isolation from wise people led to his downfall. Then this poor youth becomes very popular: “There was no end of all the people, all of whom he led.” This guy is in dire need of wise peers to help him. But he apparently became isolated, perhaps working not for the good of the community, and as a result “those who come later will not rejoice in him.” Augustine is credited with saying that the dead are always replaced by the dying. The currently popular are always replaced by those who are not yet unpopular.

For Solomon, the wise will seek a better vantage. If you are in a position without trusted friends and are not eager to seek their advice, regardless of the popularity you may enjoy for the time being, “this also is a vapor and shepherding wind.”

Jesus, as we know, did not enjoy much popularity at all, but when he had it (say, around Palm Sunday), He was wise in His kingliness to seek counsel with His heavenly Father while being compelled by the Holy Spirit. He even sought the companionship of His disciples in the Garden, though they proved no better than Job’s “friends.” We have great gifts in the body of Christ, the church, in each other, and Father, Son, and Holy Spirit. Jesus is with us always, especially as we are with each other. A threefold cord is not quickly broken. And that’s the gospel!