April 23: The Second Sunday of Easter 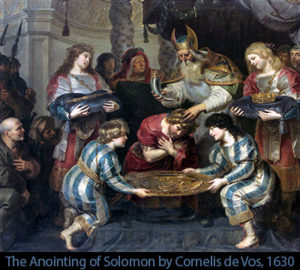 The words of the Preacher, the son of David, king in Jerusalem. Vanity of vanities, says the Preacher, vanity of vanities! All is vanity. What does man gain by all the toil at which he toils under the sun? A generation goes, and a generation comes, but the earth remains forever. The sun rises, and the sun goes down, and hastens to the place where it rises. The wind blows to the south and goes around to the north; around and around goes the wind, and on its circuits the wind returns. All streams run to the sea, but the sea is not full; to the place where the streams flow, there they flow again. All things are full of weariness; a man cannot utter it; the eye is not satisfied with seeing, nor the ear filled with hearing. What has been is what will be, and what has been done is what will be done, and there is nothing new under the sun. Is there a thing of which it is said, “See, this is new”? It has been already in the ages before us. There is no remembrance of former things, nor will there be any remembrance of later things yet to be among those who come after. -Ecclesiastes 1:1-11

In some circles, at least the gist of the passage above is famous. Many know the phrase, “Vanity of vanities!” We tend not to spend much time with the book of Ecclesiastes because it is, admittedly, perplexing and even comes off as pessimistic in these days of mission statements, strategic plans, leadership initiatives, and “the power of positive thinking.” Is it true that “all is vanity”?

This is where the meaning of the word “vanity” becomes critically important. The word “vanity” implies moral judgment ,and I think of Vanity Fair, which is a depraved carnival in John Bunyan’s Pilgrim’s Progress. The magazine by the same name is quite consistent. This is why a mirrored desk where you do your hair and makeup is called a “vanity.” When Preacher Solomon says “all is vanity,” he is not saying that everything is conceited, vain, or morally depraved. Thus, we should get that idea out of our heads.

Worse yet, some popular translations (NIV especially) use the English word “meaninglessness.” Man’s work is not meaningless though. That is the last thing Solomon wants to convey. Everything is not meaningless, or he would have had no reason to write the book.

The Hebrew word is hebel. Preacher Solomon uses it 35 times in the book. He even uses it in the superlative, “Hebel of hebels!” This is like saying “holy of holies” or “king of kings.” In other places, hebel is used to refer to a wisp, a vapor, a puff of air that disappears like a mere breath. For example, Proverbs 21:6, “The getting of treasures by a lying tongue is a fleeting hebel and a snare of death.” This helps us know that a better translation would be “vapor.” Vapor of vapors: the world and life is a wisp, like the dust particle drifting in the sunbeam, escaping your effort to attain it. It eludes your grasp.

Preacher Solomon’s point is that our labor meets the fate of sandcastles when the tide comes in—and it always comes in. “What does man gain by all the toil at which he toils under the sun?” This speaks to gaining leverage—some sort of advantage in the world that will overcome the rising tide that washes away our labors in time. Even natural advantages such as youthfulness or physical strength are hebel, vapor.

This is not written to depress you and cause you to give up on working hard with diligence and faithfulness. On the contrary it should energize our work, except with the correction of some of the false stories we tend to tell ourselves about advantages we think we might be leveraging by our ingenuity or “natural” giftedness. It ensures that all we have is to trust God. When everything else is hebel, faith in the covenant-keeping, promise-honoring God is enhanced. Certainly Jesus put no trust in that which is hebel, but He did trust His Father so that our hebel-ish lives would have true meaning for all of eternity in the Age to Come. And that’s the gospel.