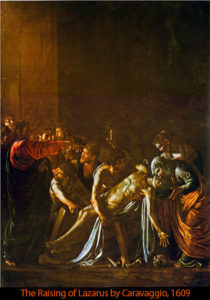 When she had said this, she went and called her sister Mary, saying in private, “The Teacher is here and is calling for you.” And when she heard it, she rose quickly and went to him. Now Jesus had not yet come into the village, but was still in the place where Martha had met him. When the Jews who were with her in the house, consoling her, saw Mary rise quickly and go out, they followed her, supposing that she was going to the tomb to weep there. Now when Mary came to where Jesus was and saw him, she fell at his feet, saying to him, “Lord, if you had been here, my brother would not have died.” When Jesus saw her weeping, and the Jews who had come with her also weeping, he was deeply moved in his spirit and greatly troubled. And he said, “Where have you laid him?” They said to him, “Lord, come and see.” Jesus wept. So the Jews said, “See how he loved him!” But some of them said, “Could not he who opened the eyes of the blind man also have kept this man from dying?”

Then Jesus, deeply moved again, came to the tomb. It was a cave, and a stone lay against it. Jesus said, “Take away the stone.” Martha, the sister of the dead man, said to him, “Lord, by this time there will be an odor, for he has been dead four days.” Jesus said to her, “Did I not tell you that if you believed you would see the glory of God?” So they took away the stone. And Jesus lifted up his eyes and said, “Father, I thank you that you have heard me. I knew that you always hear me, but I said this on account of the people standing around, that they may believe that you sent me.” When he had said these things, he cried out with a loud voice, “Lazarus, come out.” The man who had died came out, his hands and feet bound with linen strips, and his face wrapped with a cloth. Jesus said to them, “Unbind him, and let him go.”

Many of the Jews therefore, who had come with Mary and had seen what he did, believed in him. -John 11:17-27

When I was a boy, my church had a program called Royal Ambassadors that tried to mirror groups like the Boy Scouts. It had service projects and the like where you earned merit badges, pins, and so on. One of the ways to earn these was to memorize Bible verses. This passage above has the one verse probably every boy used for his repertoire of verses, “Jesus wept.” It was quick, easy, and counted as a full verse!

I remember thinking for a brief time, “Why would Jesus weep?” He could do anything and knows everything, so I couldn’t think of any reason He would cry. Yes, I had in mind a superman Jesus—something like God, except with a body. I asked my parents and teachers why Jesus would cry. I clearly remember the youth pastor’s answer, “He wept because Mary didn’t have enough faith.” He was a well-meaning 22-year-old, I’m sure, but that is the wrong answer! I had the chance to ask the senior pastor in the foyer, and he heartily congratulated me for asking such an interesting question and for all the work I had done in Royal Ambassadors, but he didn’t answer the question.

I didn’t think much about it until, years later as an adult, I heard a sermon from a radio preacher on the passage. This fellow said that Jesus wept because there is death in the world, and it wasn’t supposed to be that way. This is a pretty good answer, although it doesn’t seem to fit with the character of John the Evangelist.

I’ve grown to understand Jesus as a real man (not just Deity playing or posing as man), the kind of man that I should have been (and will be). I’ve learned that nobody in the world of first-century, second-temple Judaism could imagine anything other than a real-flesh-and-blood human as Messiah with emotions like everybody else. This helps me understand that John is telling us when we look at Jesus bursting into tears, we are seeing not just a flesh-and-blood human being, but the Word made flesh. Because Jesus came, we must put away our aloof and emotionally sterile pictures of God and replace them with the picture of the God who bursts into tears with the world’s crying. This is the key to understand the full mystery of John’s gospel.

When we read of Jesus bursting into tears the very moment He sees Mary and all the Judaeans with her, we should chant, “Surely he has borne our griefs and carried our sorrows.” He did not pretend to do this; He really did it.

In the story, Jesus knows what He’s going to do, yet there is no sense of triumphalism with John Williams’ Superman theme playing in the background. Instead, there is the Man of Sorrows, acquainted with our grief and pain, sharing it to the point of tears.

What grief, then, is stirred in Jesus? Remember that the whole story of the raising of Lazarus is symbolic of Jesus: death, rest, resurrection. It is only through the death of Jesus, His sharing the common fate of people, that the world can be saved. He has borne our griefs and carried our sorrows, even those of death. That’s what was stirred in Him, and that’s the gospel.