March 26: The Fourth Sunday in Lent 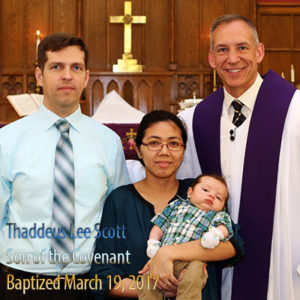 Now when he rose early on the first day of the week, he appeared first to Mary Magdalene, from whom he had cast out seven demons. She went and told those who had been with him, as they mourned and wept. But when they heard that he was alive and had been seen by her, they would not believe it.

After these things he appeared in another form to two of them, as they were walking into the country. And they went back and told the rest, but they did not believe them.

Afterward he appeared to the eleven themselves as they were reclining at table, and he rebuked them for their unbelief and hardness of heart, because they had not believed those who saw him after he had risen. And he said to them, “Go into all the world and proclaim the gospel to the whole creation. Whoever believes and is baptized will be saved, but whoever does not believe will be condemned. And these signs will accompany those who believe: in my name they will cast out demons; they will speak in new tongues; they will pick up serpents with their hands; and if they drink any deadly poison, it will not hurt them; they will lay their hands on the sick, and they will recover.”

So then the Lord Jesus, after he had spoken to them, was taken up into heaven and sat down at the right hand of God. And they went out and preached everywhere, while the Lord worked with them and confirmed the message by accompanying signs. –Mark 16:9-20

The human race today possesses an astonishing number of very early copies of the New Testament documents. From all over the world across many centuries, there is more evidence for the veracity of the copies we have archived (about 24,000) than there is for unquestioned documents such as the works of Plato (just 7). Between the original writing and the earliest surviving copies is 1,200 years for Plato, but only 40-70 years for the New Testament books! We have more solid evidence for the NT documents than we do even for recent authors such as William Shakespeare.

With all these copies, if there is any difference from one to the other, it will be very slight (e.g., the inclusion of “the” before a noun in one copy but not in another) and never makes a substantive difference in meaning. Since there are so many copies to compare, and knowing when the copies were produced (earlier is usually better) it is fairly easy to determine what the original text was. When it comes to the ending of Mark, alarm bells start going off. First, there are two extra endings (the most popular—and longer—one is copied above). Second, neither one sounds like Mark at all.

What is not in question is verses 1-8 in chapter 16. This is where the women discover Jesus is not in the tomb, and the “young man” angel in white commissions them to go tell the disciples “and Peter” that Jesus has risen. The women “fled from the tomb, for trembling and astonishment had seized them, and they said nothing to anyone, for they were afraid.” I find it too unbelievable that this is his ending. Trembling, astonishment, and silence? It was much easier for me to believe that was the original ending before studying Mark in such depth, but with everything that has gone before, this would be incredible. I think the last page was simply lost, probably due to being the most physically vulnerable page.

It would seem that pious copyists, feeling the loss of the missing final column or page, decided to add what they thought would be a suitable conclusion based on their knowledge of Matthew and perhaps Luke. While we don’t afford these endings the authority of scripture, they are curious and help us with some insight into how the early Christians (late second, early third centuries?) saw the events of Easter and their significance. Perhaps most of all, they placed emphasis upon the initial unbelief of the disciples in spite of the evidence of other witnesses. Initial unbelief should not put us off as we tell the gospel story today. Even the disciples who heard Jesus Himself speak of these things were slow to accept!

These Christians were also as curious about miraculous signs as we are. This too may indicate a slowness to believe. Jesus performed signs for a time and empowered the disciples to do them for a time, but we find that even that wasn’t enough. Now, here Jesus is ascended into heaven, and there is still misguided hope in signs. One thing they didn’t miss is that preaching is the primary way the gospel story was spread in their day (quite amazingly if you look at history!), and that it true for us today. The preaching of “Christ and Him crucified” (1 Cor. 2:2) is the story of the coming of the Kingdom of God to earth where we will reign as a royal priesthood as we were created to do. That’s the gospel. Come hear it preached and enacted in the supper with Jesus this Sunday.