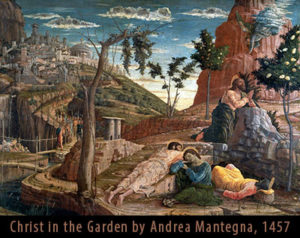 And when they had sung a hymn, they went out to the Mount of Olives. And Jesus said to them, “You will all fall away, for it is written, ‘I will strike the shepherd, and the sheep will be scattered.’ But after I am raised up, I will go before you to Galilee.” Peter said to him, “Even though they all fall away, I will not.” And Jesus said to him, “Truly, I tell you, this very night, before the rooster crows twice, you will deny me three times.” But he said emphatically, “If I must die with you, I will not deny you.” And they all said the same.

And they went to a place called Gethsemane. And he said to his disciples, “Sit here while I pray.” And he took with him Peter and James and John, and began to be greatly distressed and troubled. And he said to them, “My soul is very sorrowful, even to death. Remain here and watch.” And going a little farther, he fell on the ground and prayed that, if it were possible, the hour might pass from him. And he said, “Abba, Father, all things are possible for you. Remove this cup from me. Yet not what I will, but what you will.” And he came and found them sleeping, and he said to Peter, “Simon, are you asleep? Could you not watch one hour? Watch and pray that you may not enter into temptation. The spirit indeed is willing, but the flesh is weak.” And again he went away and prayed, saying the same words. And again he came and found them sleeping, for their eyes were very heavy, and they did not know what to answer him. And he came the third time and said to them, “Are you still sleeping and taking your rest? It is enough; the hour has come. The Son of Man is betrayed into the hands of sinners. Rise, let us be going; see, my betrayer is at hand.”

And immediately, while he was still speaking, Judas came, one of the twelve, and with him a crowd with swords and clubs, from the chief priests and the scribes and the elders. Now the betrayer had given them a sign, saying, “The one I will kiss is the man. Seize him and lead him away under guard.” And when he came, he went up to him at once and said, “Rabbi!” And he kissed him. And they laid hands on him and seized him. But one of those who stood by drew his sword and struck the servant of the high priest and cut off his ear. And Jesus said to them, “Have you come out as against a robber, with swords and clubs to capture me? Day after day I was with you in the temple teaching, and you did not seize me. But let the Scriptures be fulfilled.” And they all left him and fled.

And a young man followed him, with nothing but a linen cloth about his body. And they seized him, but he left the linen cloth and ran away naked. –Mark 14:26-52

It’s not as though Jesus has been blustery or displayed today’s highly prized Type-A personality, but Gethsemane seems like a big change in His way of being Him. Jesus has been in control of Himself, teaching, guiding, healing, and directing. Now, at Gethsemane, it looks as if He is falling to pieces and full of cynical anxiety: “You will all fall away.” Of course, about that, He was correct.

Raw humanness is put forward as an unbecoming display. Jesus is horrified, and the disciples are powerless—even over sleep. Greek heroic stories have people dying peacefully in control, and Jewish martyrdom stories highlight steadfast bravery to the bitter end. This story is neither. There is so much ordinary humanity in this story that it might even feel a little embarrassing.

Jesus’ words during His distress apparently come from the refrain of Psalms 42 and 43. The Psalms throughout the passion give Jesus a way to express His torment and even find comfort. His prayer to “Abba, Father” for rescue is repeated 3 times. The silence He received in return is tantamount to “No.” It’s hard to imagine a more heartfelt prayer of desperation, yet it goes with silent rejection. I try to keep in mind that if this was the experience for Jesus, then we should not be dismayed if we receive the same apparent silence at times in our lives.

But then where Jesus apparently had been falling to pieces and in a near panic, He arises composed and in charge again: “Are you still sleeping and taking your rest? It is enough; the hour has come. The Son of Man is betrayed into the hands of sinners. Rise, let us be going; see, my betrayer is at hand.”

This mirrors what our life should be like now that the Kingdom has come. The way of Christian witness is not usually the way of quietist withdrawal, or the way of compromise with the world, or even the way of angry militant zealots. The way of Christian witness is the way of being in Christ, in the Spirit, at the place where there is pain. Christians should be the people who are moving toward the pain when everyone else is moving away so that the healing love of God may be brought to bear right there. That’s what Jesus did: He stayed in the pain of the garden for the sake of the world until it was time to go do something else for the sake of the world: to deny Himself and take up His cross. And that’s the gospel! Come hear it preached and enacted in the supper with Jesus this Sunday.