January 22: The Third Lord’s Day after the Epiphany 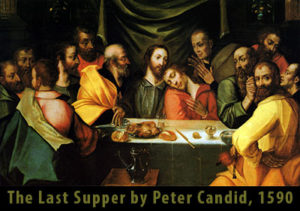 And on the first day of Unleavened Bread, when they sacrificed the Passover lamb, his disciples said to him, “Where will you have us go and prepare for you to eat the Passover?” And he sent two of his disciples and said to them, “Go into the city, and a man carrying a jar of water will meet you. Follow him, and wherever he enters, say to the master of the house, ‘The Teacher says, Where is my guest room, where I may eat the Passover with my disciples?’ And he will show you a large upper room furnished and ready; there prepare for us.” And the disciples set out and went to the city and found it just as he had told them, and they prepared the Passover.

And when it was evening, he came with the twelve. And as they were reclining at table and eating, Jesus said, “Truly, I say to you, one of you will betray me, one who is eating with me.” They began to be sorrowful and to say to him one after another, “Is it I?” He said to them, “It is one of the twelve, one who is dipping bread into the dish with me. For the Son of Man goes as it is written of him, but woe to that man by whom the Son of Man is betrayed! It would have been better for that man if he had not been born.”

And as they were eating, he took bread, and after blessing it broke it and gave it to them, and said, “Take; this is my body.” And he took a cup, and when he had given thanks he gave it to them, and they all drank of it. And he said to them, “This is my blood of the covenant, which is poured out for many. Truly, I say to you, I will not drink again of the fruit of the vine until that day when I drink it new in the kingdom of God.” –Mark 14:12-25

The theme of the Temple looms large in the last third of Mark’s gospel. All of chapter 12 is devoted to Jesus’ arrest and condemnation of the Temple. It contains parables and riddles all about the failure and consequent future of the Temple. All of chapter 13 is devoted to answering the question of when the Temple will be destroyed, along with the signs this is about to happen. It contains apocalyptic language that sounds like the end of the world for those living in the few years prior to 70AD. Mark begins chapter 14 (vv. 1-11) with a grand prelude or large canvas getting us ready for what is about to come, which is the arrest and condemnation of Jesus (the True Temple).

Do you remember when Jesus had need of the colt or donkey to make His triumphal entry into Jerusalem? He sent out two disciples to get it for Him. Now, in the passage above, we see that once again two disciples are sent out and, just like last time, strangers need only be told that Jesus has need of it and they willingly give it. This time it is a room that is needed for Jesus’ last Passover. The triumphal arrival of the King into His holy city requires a royal feast as well.

It might seem at first blush that the Temple theme is moving to the background, but there is a powerful connection with this scene in the passage above. In both the OT and the NT there are texts that hint at a new Temple. For instance, Jesus’ parable of the wicked tenants refers to a new cornerstone in just such a structure. So, what exactly will replace the Temple once it is gone? Here we find the answer. Right after sending two disciples again, Jesus enacts a meal using sacrificial language. Here is the heart of the rite, a ritual meal, that will replace and improve the old Temple system. Jesus stops the sacrifices in the old Temple because He is the new sacrifice.

No longer will His people go to a stone Temple in Jerusalem, but “my blood of the covenant, which is poured out for many” is the blood that truly takes away sins. We wouldn’t want to make the mistake of thinking that before Jesus came, sins were removed by the blood of bulls and goats and sheep. Even King David living well within that system states plainly, “You will not delight in sacrifice, or I would give it; you will not be pleased with a burnt offering.” The blood of these sacrifices was a memorial to remind God, like the rainbow was to remind God, of His covenant promises. He promised to send a Son who would indeed redeem us by His precious blood. We have our Temple (Him) and the blood that puts our sins as far as the east is from the west. And that’s the gospel! Come hear it preached and enacted in the supper with Jesus this Sunday.