December 4: The Second Sunday of Advent 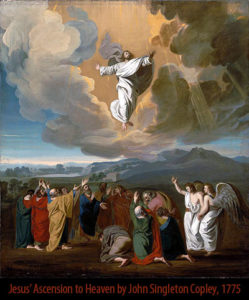 “But when you see the abomination of desolation standing where he ought not to be (let the reader understand), then let those who are in Judea flee to the mountains. Let the one who is on the housetop not go down, nor enter his house, to take anything out, and let the one who is in the field not turn back to take his cloak.

And alas for women who are pregnant and for those who are nursing infants in those days! Pray that it may not happen in winter. For in those days there will be such tribulation as has not been from the beginning of the creation that God created until now, and never will be. And if the Lord had not cut short the days, no human being would be saved. But for the sake of the elect, whom he chose, he shortened the days.

And then if anyone says to you, ‘Look, here is the Christ!’ or ‘Look, there he is!’ do not believe it. For false christs and false prophets will arise and perform signs and wonders, to lead astray, if possible, the elect. But be on guard; I have told you all things beforehand.

“But in those days, after that tribulation, the sun will be darkened, and the moon will not give its light, and the stars will be falling from heaven, and the powers in the heavens will be shaken. And then they will see the Son of Man coming in clouds with great power and glory. And then he will send out the angels and gather his elect from the four winds, from the ends of the earth to the ends of heaven. –Mark 13:14-27

In the first part of chapter 13, the disciples have asked a direct question about Jesus’ prophecy of the Temple’s utter demise. Actually it is two questions: when and how will we know it’s getting close? Jesus gives an answer that modern readers often mistake as the end of the world or the final judgment. Jesus was not predicting the end of the world though; He was predicting the end of the Temple. The verses that follow (copied above) get even more specific. Not only should they not worry (vv. 5-13), but now He tells them some things that they should and should not do.

The first thing we see is the mysterious “abomination of desolation” referred to as “he” who is standing where he shouldn’t be. Mark adds that when “he” is seen, “then let those who are in Judea flee to the mountains.” While this desolating abomination isn’t something we immediately comprehend, it prompts Mark’s exhortation for the reader to try to understand. At any rate, it obviously supports the assertion that this is not the final judgment. No one will be able to flee to the mountains then!

This time will be terrible for pregnant or nursing women, and would be especially terrible for every one if it is winter at the time. It’s going to be so terrible, that even God’s elect (the followers of Christ) could not make it through if He did not deliver them by shortening this period of suffering. During this historic episode, some people will emerge and appear to be saviors or messiahs who can deliver Israel from this wrath to come.

What we are talking about here is the time when foreign armies will take over the Temple and Jerusalem itself. The historian Josephus tells of this siege including how people starved, fought each other for rancid food, even eating their own babies, with more Jews being killed by Jews than by the Roman invaders. Jesus is telling His followers in this passage to get out and run before they are caught in this hell. The Roman-Jewish war lasted from 66-70AD. History records would-be messiahs and prophets offering hope for rescue, but all coming to nothing in the end.

Finally, Jesus speaks in terms of cosmic destruction. “The sun will be darkened, and the moon will not give its light, and the stars will be falling from heaven, and the powers in the heavens will be shaken.” Again, this is not the destruction of the world, but the destruction of the Temple. Why such a dramatic description? Because that’s how it was prophesied in Isaiah 13 and 34 and other places. It may not feel from our perspective like such a dramatic shift in redemptive history to warrant this language, but for them there was nothing bigger.

What, then, does Jesus mean when He says, “they will see the Son of Man coming in clouds with great power and glory”? Surely this refers to the Second Coming, the Advent we await, doesn’t it? Jesus is using a quotation from Daniel 7:13. That’s where we find that this is not about the return of the “Son of Man,” but about His going to God after His suffering. In His triumph and vindication with the judgment that has fallen on those who opposed God’s call, as Psalm 110 says, and Jesus has very recently quoted, His enemies will be put under His feet. That’s at God’s right hand. So from Mark’s point of view, this is the about complete vindication of Jesus: His resurrection and now His ascension. It’s “in clouds with great power and glory”!

While those in Jerusalem at the time must have wished this all was the end of the world, the hope that is held out here is exquisite: Israel will be judged, the Temple will be replaced, God’s people of all nations will be saved, Jesus will be vindicated. And that’s the gospel.