December 18: The Fourth Sunday of Advent 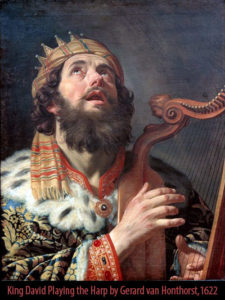 And after the deportation to Babylon: Jechoniah was the father of Shealtiel…Jacob the father of Joseph the husband of Mary, of whom Jesus was born, who is called Christ.

I once happened across what might be one of the most obscure instructional books in the world—at least in our day. It was on the proper etiquette and “liturgy” of organizing a parade. It told about the position of the Grand Marshal, of children, of the benefactors, the poor, local and national leaders, soldiers, those on horseback, musicians of different types, and so on. Parades now seem antiquated to us, as from a nearly forgotten era. We can still see from the dawn of film that it really wasn’t that long ago that parades occupied an important cultural place: ticker tape parades after victories, the parade route for the funeral of President Kennedy, and so on. That book on executing a proper parade said that the flow of the parade was to provide increasing anticipation for the one who comes at the end, the one in the position of greatest honor. All eyes were ultimately focused there.

Matthew’s genealogy above is just such a parade. Vv. 2-16 (I abridged it for the sake of space) take us from Abraham (the Grand Marshal) at the front, to Jesus (the One of greatest honor) at the end. All eyes are focused on Him! This passage is the beginning of the New Testament. I’ve wondered how many people through the centuries, having set out to read the NT, became discouraged before getting out of the first column of the first page. Jechoniah, Shealtiel, Eliskim, and Matthan are hardly household names!

These names are not a waste of time, however. This is like a drum roll or trumpet fanfare. Pay attention! Within the cultural setting of Second Temple Jews, a genealogy like this had people’s attention. It is an impressive and compelling list. Unlike Superman, Jesus does not come from an obscure place. Yes, Jesus can be tracked back to Abraham, but that was the case with any Jew (and they were not just a little bit proud of that!). By the first century AD, however, only a select few could specifically trace their own line back to King David. But wait, there’s more! It keeps going through Solomon and the other kings of Judah to the exile.

This genealogy is a grand story if you know the stories of some of the people who are listed. It tells the history of Israel as Matthew carefully shows the three groups of 14, or perhaps even more poignantly, the six groups of seven. Because of the days of creation, seven is the most powerful symbolic number. The person born at the seventh seven in the sequence of names is doubtless the person of greatest honor. That birth, Matthew is telling us, is what Israel has been awaiting for 2,000 years: That is Jesus, who is called Christ. And that’s the gospel.