November 27: The First Sunday of Advent 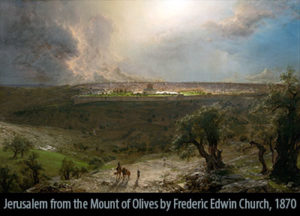 And as he sat on the Mount of Olives opposite the temple, Peter and James and John and Andrew asked him privately, “Tell us, when will these things be, and what will be the sign when all these things are about to be accomplished?” And Jesus began to say to them, “See that no one leads you astray. Many will come in my name, saying, ‘I am he!’ and they will lead many astray. And when you hear of wars and rumors of wars, do not be alarmed. This must take place, but the end is not yet. For nation will rise against nation, and kingdom against kingdom. There will be earthquakes in various places; there will be famines. These are but the beginning of the birth pains.

“But be on your guard. For they will deliver you over to councils, and you will be beaten in synagogues, and you will stand before governors and kings for my sake, to bear witness before them. And the gospel must first be proclaimed to all nations. And when they bring you to trial and deliver you over, do not be anxious beforehand what you are to say, but say whatever is given you in that hour, for it is not you who speak, but the Holy Spirit. And brother will deliver brother over to death, and the father his child, and children will rise against parents and have them put to death. And you will be hated by all for my name’s sake. But the one who endures to the end will be saved. –Mark 13:1-13

Mark’s sequence of scenes in the Temple complex have come to an end with the close of chapter 12. Jesus has used three riddles (“Was John the Baptizer sent from God?” “The Parable of the Wicked Tenants,” and “David’s son as David’s Lord”) to help explain, albeit in symbolic language, what He was doing in condemning and shutting down the Temple. Now that this sequence is complete, the Temple is still not completely out of the picture. Right after leaving, one of the disciples is awed by the buildings and expresses this amazement. Jesus replies prophetically that the Temple will not just cease operations, but will be utterly and completely destroyed— “There will not be left here one stone upon another that will not be thrown down.”

They go east, just across the Kidron Valley from the Temple, up on the Mount of Olives. Here the disciples present understandably ask a question: “When will these things be…?” This may cause you some discomfort if you’ve fallen into the modern trap of believing this passage is about the end of the world. The question Peter, James, John, and Andrew ask is not about the end of the world, but about the end of the Temple. Jesus is talking about what will happen up until 70 AD when the Temple was destroyed. He has been alluding to this all through His ministry. Israel is in sin and judgment, for that will come through foreign armies, just as it has been throughout their history.

Now, just in case this seems a little far-fetched for you, consider that everything about Jesus’ prophecy will be fulfilled locally. Take for instance, “you will be beaten [flogged] in synagogues.” This persecution only took place in the earliest history of the church prior to 70 AD. Or, “you will stand before governors and kings for my sake, to bear witness before them.” The book of Acts is filled with exactly this sort of thing, all before 70 AD. There is nothing to suggest in this conversation that Jesus was talking about some future generation. He was answering the disciples’ question with an answer that applied to them. In the next verse beyond the passage above, Jesus says that those living in Judea will be able to escape the wrath to come by fleeing to the mountains. That, of course, could not be said of the Final Judgment, proving that most of us need to read this passage far more carefully in the future!

There is a particularly alarming section near the end of this passage: “And brother will deliver brother over to death, and the father his child, and children will rise against parents and have them put to death. And you will be hated by all for my name’s sake.” It is quite helpful to know that this is pertinent to the original audience of Mark’s gospel rather than necessarily something we should expect. It was dramatically fulfilled when the Christians in Rome were viciously persecuted by Nero.

Now that I’ve worked to correct the modern error of believing this prophecy is utterly future, we should take quite seriously that persecution is not over. The Kingdom has come, but certainly not fully. Many Christians today suffer persecution every bit as severe as those in the first century prior to 70 AD. Jesus tells us “the one who endures to the end will be saved.” No matter what may befall us, salvation to life in God’s kingdom awaits those who endure and do not forsake Him until that day. And that’s the gospel.