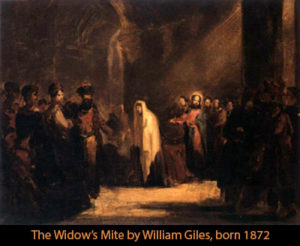 And as Jesus taught in the temple, he said, “How can the scribes say that the Christ is the son of David? David himself, in the Holy Spirit, declared, “‘The Lord said to my Lord, Sit at my right hand, until I put your enemies under your feet.’ David himself calls him Lord. So how is he his son?” And the great throng heard him gladly.

And in his teaching he said, “Beware of the scribes, who like to walk around in long robes and like greetings in the marketplaces and have the best seats in the synagogues and the places of honor at feasts, who devour widows’ houses and for a pretense make long prayers. They will receive the greater condemnation.”

And he sat down opposite the treasury and watched the people putting money into the offering box. Many rich people put in large sums. And a poor widow came and put in two small copper coins, which make a penny. And he called his disciples to him and said to them, “Truly, I say to you, this poor widow has put in more than all those who are contributing to the offering box. For they all contributed out of their abundance, but she out of her poverty has put in everything she had, all she had to live on.” –Mark 12:35-44

Mark has recorded scene after scene in the Temple courtyards, but now we come to the final one. It seems a little complicated at first because Jesus tells a riddle, using Psalms 2, 89, 110 and 2 Samuel 7, which appears to challenge the commonly held belief that the Messiah, the great coming king, would be born from the family of David. That’s not what Jesus is doing, but He is questioning the idea that the Messiah will be simply or merely a king from David’s family. This king will be David’s son, but more to the point, David’s Lord.

This may seem like an odd thing for Jesus to do at this point in the story, but it answers quite brilliantly the issue of the scribe in the previous scene asking about the most important part of the law. Jesus says the scribe is “not far from the kingdom.” Why is he close, but not in the kingdom? This is the answer: loyalty to Jesus Himself. Like the Rich Young Ruler, he’s very close, but lacks one thing. In both cases, it is loyalty to Jesus. It’s not enough to get a lot of things right, even watching for a “son of David” to be the king. One must follow with full loyalty, Jesus Christ, David’s Lord.

Then Jesus warns to “Beware of the scribes, who like to walk around in long robes and like greetings in the marketplaces and have the best seats in the synagogues and the places of honor at feasts, who devour widows’ houses and for a pretense make long prayers. They will receive the greater condemnation.” Yikes! That’s a bold and sobering warning. Of course, Jesus is not condemning robes or longish prayers, but those who use these things as a pretense. There is a stark contrast to what Jesus has just said: when David’s Lord became David’s son (that’s Jesus incarnate!), He in no way used such a position to gain popularity or wealth. Instead He gave all that He had.

Which leads to the next sub-scene where people were putting money into the offering box. There were some who were giving a lot, but not all that they had. In other words, they were close, but they lacked full loyalty. And then there was one who gave all that she had. Giving up one’s life is the theme of this final short scene of the series in the Temple courtyards. The scribes “who devour widows’ houses” are thoroughly outdone in the economy of the Kingdom by a widow who has a house in the Kingdom. David’s Lord, who gave all that He had, will make sure of that. And that’s the gospel.