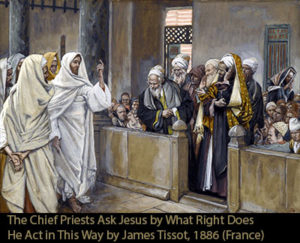 And they came again to Jerusalem. And as he was walking in the temple, the chief priests and the scribes and the elders came to him, and they said to him, “By what authority are you doing these things, or who gave you this authority to do them?” Jesus said to them, “I will ask you one question; answer me, and I will tell you by what authority I do these things. Was the baptism of John from heaven or from man? Answer me.” And they discussed it with one another, saying, “If we say, ‘From heaven,’ he will say, ‘Why then did you not believe him?’ But shall we say, ‘From man’?”—they were afraid of the people, for they all held that John really was a prophet. So they answered Jesus, “We do not know.” And Jesus said to them, “Neither will I tell you by what authority I do these things.” –Mark 11:27-33

I run and walk at a park close to my house. This park has a long, paved path through both wooded areas and the parts that are developed, including 4 baseball fields that are heavily used in the fall. Last week I was jogging by late in the evening when several of the games were finished, and the stream of cars impatiently trying to exit was huge. Joggers beware!

I noticed a particularly large jam of cars with some honking their horns. This was when I realized that the car in the front of the line had stalled. Some poor mom with kids in the back was frantically trying to get the car started, to no avail. There was one of those pickup trucks behind her with big wheels and has been raised high from the ground. This young man jumped down from the truck, stood in the middle of the access road, and began directing traffic around the stalled car, as well as providing stop-and-start directions for a few cars trying to enter on the road. It was frankly impressive as he got everything moving again, took the pressure from the unfortunate mom, and so on.

I had seen this from some distance and had almost made my way through where the path intersects that road when my attention was turned to a city police officer who drove onto the grass, parked, quickly exited his vehicle, and yelled at the young man still directing traffic, “Who do you think you are!” I don’t know the ins and outs of the law on this matter, but it was clear that the police officer did not approve or have any appreciation of the man’s leadership.

At our place in Mark’s gospel, Jesus had shut down the operations in the Temple for an hour or two the day before, as He condemned the temple as a cave of rebels. They were nationalistic in their zeal for Israel over everybody else. Jesus reminded them of God’s word preached by Jeremiah that the Temple was to be a house of prayer for all the nations. It was a city on a hill, a light to the nations, a salty place without envy. Instead, they just wanted to make Israel great again. And Jesus won’t have it.

So in the passage above Jesus comes back to the Temple the next day, and He gets asked a question by the “police”: “Who do you think you are!” Jesus directed traffic in the temple; He had been functioning in a very priestly way (remember priests are the guardians of holiness), and they didn’t like it. Jesus answers their question with an ingenious question that also concerned a man who had functioned in a priestly way, but without their authorization: John the Baptizer.

In keeping with the character of Mark’s writing and literary purpose, this is posed as a riddle that the careful reader of Mark’s gospel will understand but the chief priests, scribes, and elders won’t. Often the conflict here between Jesus and the others is thought of as Jesus asking His question in a crafty way to avoid answering their question. That is a failed interpretation. Jesus wasn’t just turning the tables on them: He was answering their question with a question. In other words, if they could answer His question, then they’d have the answer to theirs. But they can’t and won’t.

We careful readers know that Jesus was anointed King by John the Baptizer, and that’s the answer to “Who do you think you are!” He has not yet been enthroned, but He has been anointed, and He was doing exactly what He should do by condemning the Temple (and all those who run it) as God’s true king. Those who take up their cross daily and follow Jesus never need to wonder about where the benefits of the Temple are or who has authority over those benefits. It is King Jesus, and that’s the gospel.