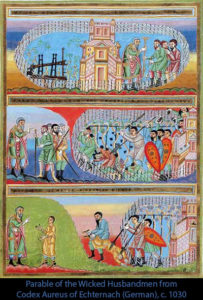 And he began to speak to them in parables. “A man planted a vineyard and put a fence around it and dug a pit for the winepress and built a tower, and leased it to tenants and went into another country. When the season came, he sent a servant to the tenants to get from them some of the fruit of the vineyard. And they took him and beat him and sent him away empty-handed. Again he sent to them another servant, and they struck him on the head and treated him shamefully. And he sent another, and him they killed. And so with many others: some they beat, and some they killed. He had still one other, a beloved son. Finally he sent him to them, saying, ‘They will respect my son.’ But those tenants said to one another, ‘This is the heir. Come, let us kill him, and the inheritance will be ours.’ And they took him and killed him and threw him out of the vineyard. What will the owner of the vineyard do? He will come and destroy the tenants and give the vineyard to others. Have you not read this Scripture: “‘The stone that the builders rejected has become the cornerstone; this was the Lord’s doing, and it is marvelous in our eyes’?”

And they were seeking to arrest him but feared the people, for they perceived that he had told the parable against them. So they left him and went away. –Mark 12:1-12

For the first 11 chapters of Mark we’ve seen parables that, especially in the tradition of Isaiah, were meant to obscure the truth. They come both in the form of oral stories and dramatic acts (e.g., the cursing of the fig tree or most of the miracles). Their obscurity is, in large measure, because their truth was a commentary on a crisis brought about by Jesus’ presence and work. To make the commentary too plain would have brought about the events of the cross prematurely. Interestingly though, even the disciples don’t have eyes to see these things for a long time. Still yet, we must work to understand the parables knowing that their meanings may not be what they happen to seem like to the unstudied reader. The content of each of the parables is important, but the very fact Jesus uses them at all is evidence of His messiahship since it was prophesied that Messiah would speak in parables thus.

Now we come to chapter 12, and Jesus tells a parable that is painfully clear. It is still a commentary on the crisis of His presences and work, but it is told in such a way as to advance the crisis. This is a big change! Jesus has just condemned the Temple, predicting its destruction while quoting Jeremiah. There is no doubt that Israel’s rulers (those who just questioned Jesus’ authority immediately before the passage above) are the tenants. They have rejected the repeated testimony of the prophets and have not given any fruit to the owner and planter, who is the Father in heaven.

This parable has been told before. In Isaiah 5 we hear of a vineyard that produced fruit and thorns. The fruit is hoarded up by those who rule in Jerusalem. Now we see more of the meaning that the vineyard was supposed to be a blessing to all the nations (remember Jeremiah’s line that Jesus quotes, “My house shall be called a house of prayer for all the nations, but you have turned it into a den of [nationalist zealots].” The fruit was first for the Jew, but then for the Gentile. The Jewish rulers rejected this notion. They wanted to keep all the Father’s blessings for their own advantage.

Jesus augments Isaiah’s parable though by inserting Himself into the story. There are servant-messengers (the prophets), but Jesus is not merely a servant-messenger, He is the beloved Son of the owner and planter and the Heir to the entire vineyard! Then Jesus reveals the earthly fate of the Son and Heir: death and expulsion. And He adds the fate of the tenants: destruction and reassignment of the vineyard to others. This should be powerfully inspiring to Gentile readers, but careful readers must notice that it is unimaginably enraging to the chief priests, Pharisees, and elders.

Jesus ends the scene with a question. It suggests, well, more than suggests, that He is a stone that was rejected for the Temple. They are the builders who rejected Him, but He was in fact not just any stone, but the Cornerstone all along. God did it and for those who have eyes to see, it is marvelous. And that’s the gospel.