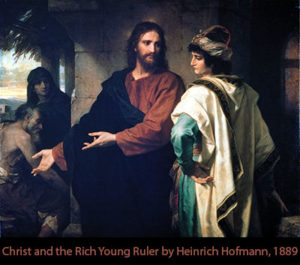 And as he was setting out on his journey, a man ran up and knelt before him and asked him, “Good Teacher, what must I do to inherit eternal life?” And Jesus said to him, “Why do you call me good? No one is good except God alone. You know the commandments: ‘Do not murder, Do not commit adultery, Do not steal, Do not bear false witness, Do not defraud, Honor your father and mother.’” And he said to him, “Teacher, all these I have kept from my youth.” And Jesus, looking at him, loved him, and said to him, “You lack one thing: go, sell all that you have and give to the poor, and you will have treasure in heaven; and come, follow me.” Disheartened by the saying, he went away sorrowful, for he had great possessions.

And Jesus looked around and said to his disciples, “How difficult it will be for those who have wealth to enter the kingdom of God!” And the disciples were amazed at his words. But Jesus said to them again, “Children, how difficult it is to enter the kingdom of God! It is easier for a camel to go through the eye of a needle than for a rich person to enter the kingdom of God.” And they were exceedingly astonished, and said to him, “Then who can be saved?” Jesus looked at them and said, “With man it is impossible, but not with God. For all things are possible with God.” Peter began to say to him, “See, we have left everything and followed you.” Jesus said, “Truly, I say to you, there is no one who has left house or brothers or sisters or mother or father or children or lands, for my sake and for the gospel, who will not receive a hundredfold now in this time, houses and brothers and sisters and mothers and children and lands, with persecutions, and in the age to come eternal life. But many who are first will be last, and the last first.”– Mark 10:17-31

The passage above is a well-known story to Christians. It has been interpreted and applied in several different ways and they aren’t all correct. Let’s get something cleared up right from the start because everything else that follows won’t be understood quite right if we trip-up from right out of the gate. When the rich man (Matthew says he was “young” and Luke says he was a “ruler”) ran up and knelt before Jesus asking, “Good Teacher, what must I do to inherit eternal life?” he was not asking, “What must I do so my soul will go to heaven when I die?” Now, come on, I know that’s what you’ve thought before!

Reading the gospels with historically informed eyes changes the “story” for many of us. This is confirmed and informed by rabbinic literature and the Dead Sea Scrolls to let us in on something that may shock many Christians who believe the Post-Enlightenment, Post-Reformation story of salvation: Jews at the time of Jesus were not concerned about their souls going to a disembodied spirit heaven when they died. This, of course, helps to explains why we don’t find hardly anything about it in Jesus’ preaching. Before you start to protest (“But what about…?), consider what it was they did believe because that will change the way you read all the NT documents.

They believed they lived in a present evil age and that there was an Age to Come. They believed the Age to Come and the Kingdom of God is the same thing. Eternal life is for those in the Age to Come because the present age is full of sin and injustice, lying and oppression. It is a place where the wicked get away with things. Any Jew of the time wants to enter (or “inherit”) the Kingdom of God because that is where God is, at least, ruling the rule as it should be. Messiah would bring this Kingdom or this Age to Come.

That makes a lot more sense when Jesus says, “you will have treasure in heaven.” He is not talking about something up in the sky, but something on earth—the New Heavens and the New Earth, the Kingdom of God where there is eternal life and treasure stored. (The word “eternal” in the original text translates a word which means “belonging to the Age.”) Ask Pharisees or Sadducees or Essenes or whomever ruled in Israel at the time who would inherit entrance and treasure to the Age to Come and the answer was simple: those who kept the law and those who were blessed by God with riches. Jesus affirms the former (law-keepers) but denies the latter (rich people). He instructs the rich man to repent of his faith in riches as well as how the community regarded him for having great possessions and follow Jesus. This is untenable for him and he, sadly, did not deny himself, take up his cross, and follow Jesus. Instead, he clung to the values of the present evil age.

“The disciples were amazed at his words” because they believed people would enter the Kingdom like the rich man believed. Lest they missed it, Jesus says vividly, “Children, how difficult it is to enter the kingdom of God! It is easier for a camel to go through the eye of a needle than for a rich person to enter the kingdom of God.” Now they are “exceedingly astonished, and said to him, ‘Then who can be saved?’”

They have finally got something right: salvation, which is eternal life in the Kingdom of God on the earth, is impossible by human power. And so “Jesus looked at them and said, ‘With man it is impossible, but not with God. For all things are possible with God.’” And that’s the gospel!