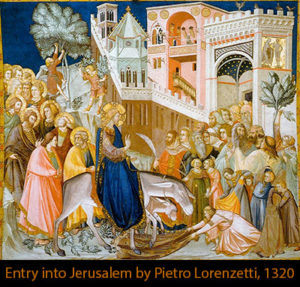 Now when they drew near to Jerusalem, to Bethphage and Bethany, at the Mount of Olives, Jesus sent two of his disciples and said to them, “Go into the village in front of you, and immediately as you enter it you will find a colt tied, on which no one has ever sat. Untie it and bring it. If anyone says to you, ‘Why are you doing this?’ say, ‘The Lord has need of it and will send it back here immediately.’” And they went away and found a colt tied at a door outside in the street, and they untied it. And some of those standing there said to them, “What are you doing, untying the colt?” And they told them what Jesus had said, and they let them go. And they brought the colt to Jesus and threw their cloaks on it, and he sat on it. And many spread their cloaks on the road, and others spread leafy branches that they had cut from the fields. And those who went before and those who followed were shouting, “Hosanna! Blessed is he who comes in the name of the Lord! Blessed is the coming kingdom of our father David! Hosanna in the highest!”

And he entered Jerusalem and went into the temple. And when he had looked around at everything, as it was already late, he went out to Bethany with the twelve. –Mark 11:1-11

It’s quite a climb from Jericho (the lowest elevation of any city on earth—846 ft. below sea level) to Jerusalem (2582 ft. above sea level). At the peak of Jerusalem was the temple. This is the place where God had placed His name and special presence. Through the regular daily sacrifices there, Israel could take confidence in forgiveness of sins and God’s continued fellowship with them. The temple is the one place where heaven and earth meet. Going there would be quite a spectacular experience. Add to that the Passover traditions of celebrating the great Jewish stories of the past, full of hope and freedom, along with reunions with old family and friends. No wonder there was feasting, prayer, dancing and singing! Where was the Kingdom of God for them? Right there.

That is the environment in which Jesus and the disciples approach Jerusalem. They are processing up to the Kingdom, except this time they have the King with them. He’s riding on a colt that He has commanded with His sovereign freedom. The people get it because they provide a red carpet treatment using their cloaks. (Nobody would throw down the cloaks on the dirt for anyone but a king!)

There have been other messianic figures in the past such as Judas Maccabaeus. He defeated the Syrian king, Antiochus Epiphanes. This was 200 years before Jesus, and when he entered Jerusalem, he cleansed and rebuilt the temple (this is undoubtedly messianic stuff). The people waved palm branches and sang hymns of praise. His dynasty was enthroned for a century. The picture Mark (and the other gospel writers) is painting is clear: this scene in Mark 11 is a royal reception of Jesus. The disciples have been told of His royalty since chapter 8 and that’s why they have traveled there.

For such a grand and exciting scene, it ends with a great big nothing. Jesus checks out things around the temple and leaves not just the Temple, but Jerusalem—just like that. Mark lets the reader hang in such suspense that he might as well have added, “Tune in next time….”

What the crowds were chanting was correct. Jesus is the greater David, and He is bringing the greater Kingdom. There will be forgiveness of sins with stories of hope and freedom. There will be feasting, prayer, dancing and singing. But there is going to be a cleansing, and this cleansing is unlike anything anyone has ever expected. It will have an outcome that won’t look much like feasting, prayer, dancing and singing, but that is where it leads; nonetheless, it is necessary for God’s will to be done on earth as it is in heaven. And, strangely enough, that’s the gospel!