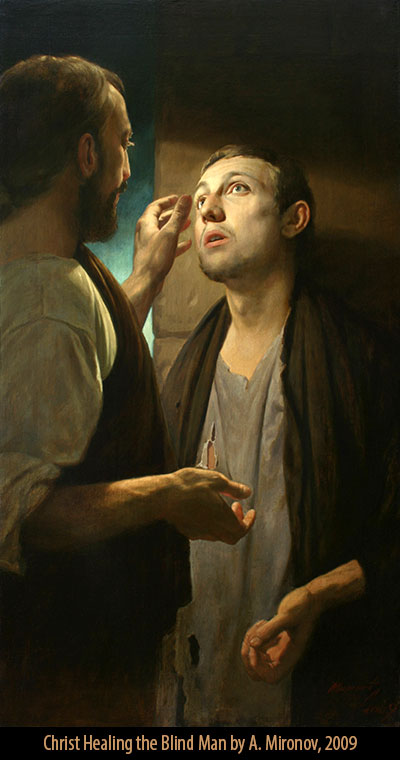 Don’t miss worship this SATURDAY at 5:30 p.m. followed by dinner. This is an annual July tradition for Redeemer.

And they came to Bethsaida. And some people brought to him a blind man and begged him to touch him. And he took the blind man by the hand and led him out of the village, and when he had spit on his eyes and laid his hands on him, he asked him, “Do you see anything?” And he looked up and said, “I see men, but they look like trees, walking.” Then Jesus laid his hands on his eyes again; and he opened his eyes, his sight was restored, and he saw everything clearly. And he sent him to his home, saying, “Do not even enter the village.”

And Jesus went on with his disciples to the villages of Caesarea Philippi. And on the way he asked his disciples, “Who do people say that I am?” And they told him, “John the Baptist; and others say, Elijah; and others, one of the prophets.” And he asked them, “But who do you say that I am?” Peter answered him, “You are the Christ.” And he strictly charged them to tell no one about him. – Mark 8:22-30

Jesus is presented with a blind man, and the people beg Jesus to heal him. Jesus has shown in Mark’s gospel that He can heal a person with a word, with meaningful touch, with their touching His garment, or with the person not even present. He performs healings in the presence of crowds, in the presence of the disciples, or in private. We can see that the place and situation do not change the efficacy of the miracle, but Jesus uses place and situation to give meaning to the miracle.

In the passage above He takes the man from Bethsaida, which is on the northern part of the Sea of Galilee, and takes him out of the village, on the way to Caesarea Philippi. That would have been a long walk! It’s about an hour’s drive today on well-paved roads at full speed. It’s not clear how far He took the man outside the village, but the miracle was performed along this journey, and the journey matters a great deal.

Both the account of the blind man and the account of going to the uppermost point of the Jordan River work hand-in-hand. Just as the blind man receives His sight, so the disciples gain their own kind of sight (or insight). Just as Jesus takes the blind man away from the village, so Jesus takes the disciples away from the sea and the crowds. And just as He insists that the newly-sighted man not go back and tell people, so Jesus insists the same for the disciples. The kingdom-mission has become revealed as the Messiah-mission, and things must happen as secretly as possible at this point.

Both the blind man and the disciples receive their sight in a two-stage process. The blind man sees “men, but they look like trees, walking.” Jesus has made clear that His healings are like parables. The parables are Jesus’ commentary on the crisis brought about by His own presence and work. In this miracle Jesus is revealing to the disciples something about themselves. Earlier in Mark’s gospel, Jesus promised that they could see and hear the mysteries of the Kingdom, but then He told them that they were blind. They see, but they do not see clearly. That will take more work.

Jesus does more work with the man, and the man sees clearly. Jesus does more work with the disciples by asking “Who do people say that I am?” Peter, speaking for the disciples, “You are the Messiah!” (Christ is another word for Messiah.) Now, at last their eyes are opened. Everything is different now because the road from the top of Israel to Jerusalem is going to be full of many more eye-openers. Expectations will need to be adjusted since, where the first half of the gospel has been revealing the Son of God, they now will begin to see the dying Son of God.

One of the great things about Mark’s gospel is that it helps us answer the question about who Jesus is. We are not to answer according to our ideas, but according to who He said He is along with what the apostles tell us. The disciples weren’t expecting a divine redeemer; they were longing for a king. Their eyes are so newly opened that they do not yet know they’ve found Him, but we do. Jesus is not just announcing God’s kingdom; He is in fact its King. And that’s the gospel!