July 31: The Eleventh Sunday after Pentecost 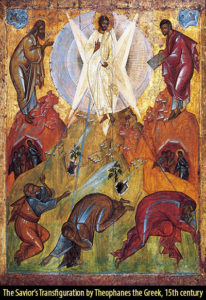 And after six days Jesus took with him Peter and James and John, and led them up a high mountain by themselves. And he was transfigured before them, and his clothes became radiant, intensely white, as no one on earth could bleach them. And there appeared to them Elijah with Moses, and they were talking with Jesus. And Peter said to Jesus, “Rabbi, it is good that we are here. Let us make three tents, one for you and one for Moses and one for Elijah.” For he did not know what to say, for they were terrified. And a cloud overshadowed them, and a voice came out of the cloud, “This is my beloved Son; listen to him.” And suddenly, looking around, they no longer saw anyone with them but Jesus only. – Mark 9:2-8

God not only travels on the clouds (Ps. 104:3), but His glory comes as a cloud (2 Chronicles 5:14; 1 Kings 8:11; Ezekiel 10:4; Exodus 40:35.) All the way back in Exodus 13 God leads the Israelites in the cloud by day. This cloud descends on the mountain where Moses receives the Ten Commandments. There are plenty of examples, but in the passage above we find Jesus and 3 disciples on a mountain with a cloud (probably Mt. Hermon since Caesarea Philippi is at its base).

All of a sudden Jesus’ “clothes became radiant, intensely white, as no one on earth could bleach them. 4 And there appeared to them Elijah with Moses, and they were talking with Jesus.” This must have been quite a scene! Peter, who tends to talk unproductively when he gets nervous, suggests they make tents as though this were the Feast of Booths. In his anxiety he deems Jesus, Moses, and Elijah to be co-equals. And then the cloud! “A voice came out of the cloud, ‘This is my beloved Son; listen to him.’ And suddenly, looking around, they no longer saw anyone with them but Jesus only.”

When Moses experienced the cloud, he glowed. His glow was a reflection of God. But Jesus does not reflect light, He produces it. The voice speaks from the cloud of the one producing light and Moses and Elijah are completely off the stage. Let there be no mistake: Jesus is the only one to follow and hear. A common error pops up here frequently. This passage is not about Jesus’ deity. More than one preacher has tripped up exegetically and taught that. Contrary to Wesley’s otherwise great carol, Jesus is not the Godhead “veiled in flesh.” The Godhead is manifested in the flesh of Jesus. He was not God in disguise until the mask was removed here at the Transfiguration. Jesus always reveals God and never veils or disguises Him. Jesus tells Philip who was not present at the Transfiguration, “Whoever has seen me has seen the Father.”

Rather than revealing true deity, this scene exhibits true humanity. When we were created, we were supposed to reflect the glory of God. That’s why Moses’ face glowed after he beheld God in the cloud. Stephen sees Jesus at the Right Hand when the heavens opened above the Sanhedrin and his face shone like an angel. We were made to glow the glory of God, but sin has dimmed us. Jesus is redeeming that.

It is also notable that the cloud came down on the disciples and they did not die. That may not shock us, but it should. Moses had to be hidden in the cleft of the rock, but Peter, James, and John were “overshadowed” and lived to tell about it. What does this tell us about Jesus? Moses (and all he represents) is gone; Elijah (and all he presents) is gone, and now Jesus gives what Moses could not and Elijah could not. Jesus is the tabernacle Peter suggested; He is the temple to end all temples and the sacrifice to end all sacrifices, the priest, king, and prophet to end all priests, kings and prophets. And that’s the gospel!