July 3: The Seventh Sunday after Pentecost 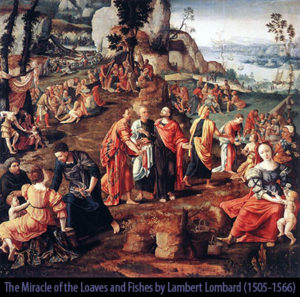 In those days, when again a great crowd had gathered, and they had nothing to eat, he called his disciples to him and said to them, “I have compassion on the crowd, because they have been with me now three days and have nothing to eat. And if I send them away hungry to their homes, they will faint on the way. And some of them have come from far away.” And his disciples answered him, “How can one feed these people with bread here in this desolate place?” And he asked them, “How many loaves do you have?” They said, “Seven.” And he directed the crowd to sit down on the ground. And he took the seven loaves, and having given thanks, he broke them and gave them to his disciples to set before the people; and they set them before the crowd. And they had a few small fish. And having blessed them, he said that these also should be set before them. And they ate and were satisfied. And they took up the broken pieces left over, seven baskets full. And there were about four thousand people. And he sent them away. And immediately he got into the boat with his disciples and went to the district of Dalmanutha. – Mark 8:1-10

This passage begins a new section in Mark. Jesus is still in the predominantly Gentile area where He conquered the army of demons and healed the deaf mute. In both cases there was a great deal of spreading the good news of Jesus’ work (despite His objections!). Now a crowded had gathered and apparently they have had something like a 3-day bible conference. I wish the gospel writers had told us more about how that worked, but they didn’t.

This feeding of the 4,000 looks very similar to the prior feeding of the 5,000 men. Even the conversation with the disciples is strikingly parallel. This has led some to suggest such ridiculous ideas as a later editor inserting the story at some point using a different source. Mark is a careful and particular writer and the book itself has amazing literary structure and form. This is a different event entirely, but the disciples are the same men they were before, and there is even more urgency.

Mark calls attention to the length of time (3 days) they had been together and that there were no towns or villages close by where they could go to get food. The people were so famished as to be ready to “faint on the way” if they walked back to their homes.

Mark is setting the scene for a theme that emerges far more prominently in this gospel account, viz., the disciples fail to understand what Jesus is doing at almost every turn. Granted, nothing like this had ever happened before, so they are hardly to blame. But Mark uses their slowness to understand as a way to show how Jesus’ identity, as Israel’s true Messiah, was being unveiled. While I can’t think of any prophecies that say Jesus would multiply bread and fish, bread and fish as symbols tell us a great deal about the work of Jesus the Messiah. I’m looking forward to exploring that in the sermon on Sunday.

For now, we wouldn’t want to miss the similarity of Jesus’ compassion in both miracle stories. Jesus makes plain to His Jewish disciples, “I have compassion on the crowd.” In that crowd are many Gentiles. At the previous mass feeding Mark says, “He had compassion on them, because they were like sheep without a shepherd.” In this second feeding, Matthew and Luke record that Jesus gave them the Lord’s Prayer. Mark doesn’t, but He makes sure we know that it is Jesus who gives us our daily bread. It is easy in our world of industrial food production to forget that the Lord has a personal concern for us, even in the provision of food.

Another similarity is that in both accounts, it is the disciples who do the feeding. Jesus is the host, but His disciples distribute the food. There are accounts of “magicians” in the ancient world who performed tricks for money and fame, but Jesus’ disciples are nothing like that. He brings them into the word in which He is engaged. What a fellowship and joy divine to know that we are not only fed by Jesus, but that He uses us to extend His compassion and food to the world! And that’s the gospel!