July 24: The Tenth Sunday after Pentecost 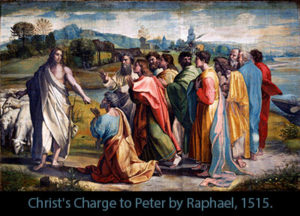 And he began to teach them that the Son of Man must suffer many things and be rejected by the elders and the chief priests and the scribes and be killed, and after three days rise again. And he said this plainly. And Peter took him aside and began to rebuke him. But turning and seeing his disciples, he rebuked Peter and said, “Get behind me, Satan! For you are not setting your mind on the things of God, but on the things of man.”

And calling the crowd to him with his disciples, he said to them, “If anyone would come after me, let him deny himself and take up his cross and follow me. For whoever would save his life will lose it, but whoever loses his life for my sake and the gospel’s will save it. For what does it profit a man to gain the whole world and forfeit his soul? For what can a man give in return for his soul? For whoever is ashamed of me and of my words in this adulterous and sinful generation, of him will the Son of Man also be ashamed when he comes in the glory of his Father with the holy angels.”

And he said to them, “Truly, I say to you, there are some standing here who will not taste death until they see the kingdom of God after it has come with power.” – Mark 8:31-9:1

Jesus asked the question so many need to answer: “Who do you say that I am?” Peter, on behalf of the disciples, gives a glorious and correct answer, “You are the Christ.” The word Christos had come to mean the Anointed One (a christening is an anointing), the Messiah, the King to end all kings. And Jesus accepts the title. This is great: there is no need to wonder anymore if Jesus is the Messiah. Let the festival begin!

Well, maybe not just yet. “And he began to teach them that the Son of Man must suffer many things and be rejected by the elders and the chief priests and the scribes and be killed, and after three days rise again.” Um, are you sure about that? Mark makes it abundantly clear, “And he said this plainly.” Wow! This is unexpected. We connect the Suffering Servant from Isaiah with the Messiah, but they did not. Nobody in Israel was thinking that the Messiah who would be God’s agent in bringing the kingdom, in sorting out the mess Israel was in, and putting the Gentiles in their place, would suffer and be killed. This is shocking and scandalous.

Peter knows just what to do. This is a great moment for the team and it should not be sullied, so “Peter took him aside and began to rebuke him.” We saw in the passage just before this one that when Jesus gave sight to the blind man, it wasn’t all at once. Here the disciples have received sight (“You are the Christ.”), but there’s still a lot of sight to be gained. Jesus does not mince words: “But turning and seeing his disciples, he rebuked Peter and said, ‘Get behind me, Satan! For you are not setting your mind on the things of God, but on the things of man.’”

Curiously Jesus attributes Peter’s view to Satan himself! The verb for “rebuked” is used elsewhere for what Jesus does to demons. There is more going on that meets the eye. It’s easy to understand Peter’s reaction though. Jesus’ statement that He must suffer probably went against everything Peter had been taught about Messiah from everyone in his life—perhaps even from his own mother. Yet Jesus is saying that He is the Messiah, the King, but He came not to live but to die. He is going to lose His life and all who follow Him must follow in the same way.

What the disciples are about to learn is that death, which has come because of sin, is close to defeat. Jesus will go to the cross and die, and that will be victory. This turns the values of this world on their head. Jesus did not come to bring the kingdom through an army, cultural compromise, or isolationism. He didn’t take power; He gave it up. And this is victory—both for Him and all who follow in His way. And that’s the gospel!