June 5: The Third Sunday after Pentecost 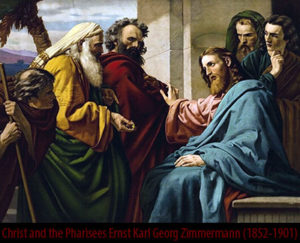 Now when the Pharisees gathered to him, with some of the scribes who had come from Jerusalem, they saw that some of his disciples ate with hands that were defiled, that is, unwashed. (For the Pharisees and all the Jews do not eat unless they wash their hands, holding to the tradition of the elders, and when they come from the marketplace, they do not eat unless they wash. And there are many other traditions that they observe, such as the washing of cups and pots and copper vessels and dining couches.) And the Pharisees and the scribes asked him, “Why do your disciples not walk according to the tradition of the elders, but eat with defiled hands?” And he said to them, “Well did Isaiah prophesy of you hypocrites, as it is written, “‘This people honors me with their lips, but their heart is far from me; in vain do they worship me, teaching as doctrines the commandments of men.’ You leave the commandment of God and hold to the tradition of men.” – Mark 7:1-8

Mark pursued a theme earlier in the book where the scribes and Pharisees pursued Jesus and tried to get Him to say something incriminating. He kept showing them up according to their own arguments, so they started spreading around that He was possessed by Beelzebul. A lot has happened in Mark’s gospel since then, but now we see them returning. They mainly work in Jerusalem, so it appears that they are journeying to Galilee to accuse Jesus. That makes sense when you consider that He recently fed well over 5,000 people. That’s going to get some attention. Accordingly, they attack on the subject of food. They want to discredit Jesus as an acceptable host. His disciples who “ate with hands that were defiled, that is, unwashed” obviously were not the kind of people a good Israelite would go to for food!

It’s not only about food though. The last miracle Mark reports came after Jesus walked on the sea and stilled the waters as He got into the boat with the disciples. “And wherever he came, in villages, cities, or countryside, they laid the sick in the marketplaces and implored him that they might touch even the fringe of his garment. And as many as touched it were made well.” Not unlike the woman with the issue of blood who touched Jesus’ garment, those who did so were made well. All the scribes and Pharisees have left is to (in the name of righteousness, of course) get the people to believe there is uncleanness with Jesus. Don’t take food from His unclean disciples, and don’t touch His unclean garments if you know what’s good for you!

Jesus pulls no punches in His response to these Jerusalem goons. He quotes Isaiah 29:13, which is a prophecy of the destruction of Jerusalem, especially on those who are reputable in “wisdom” and “discernment” (v. 14) but are based on “a commandment taught by men.” Jesus is letting them know that He knows they are guilty of hypocrisy, claiming to be teachers of God’s truth and law, but in fact, they are just making it up as they please. This is a devastating claim if you are a scribe or Pharisee.

The larger issue here is who speaks for God. Both Jesus and the scribes and Pharisees hold the Scriptures as being what God has said. But who’s right? It isn’t simply a matter of differing perspectives: somebody is terribly wrong. Then again, it would be a mistake to think that Jesus’ point is some abstract idea of “scripture vs. tradition,” as though tradition is something always bad. Instead Jesus is challenging the very foundation on which the Pharisees had built their society. If the Kingdom of God was coming as Jesus was healing, feasting with outcasts, and waging war on the kingdom of darkness, then Pharisaic tradition, so deeply layered and ingrained in the people, was being ruled out.

Mark writes his gospel to let us know—yea, even a Gentile audience as the parenthetical explanation in vv. 3-4 suggest—that the Shepherd-Warrior-King, the Greater David, is here and He does what has been prophesied in God’s holy word. The corrupt traditions cannot stand and the truth shall prevail in the Messiah, Jesus Christ. And that’s the gospel!