June 19: The Fifth Sunday after Pentecost 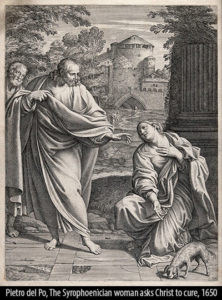 And from there he arose and went away to the region of Tyre and Sidon. And he entered a house and did not want anyone to know, yet he could not be hidden. But immediately a woman whose little daughter had an unclean spirit heard of him and came and fell down at his feet. Now the woman was a Gentile, a Syrophoenician by birth. And she begged him to cast the demon out of her daughter. And he said to her, “Let the children be fed first, for it is not right to take the children’s bread and throw it to the dogs.” But she answered him, “Yes, Lord; yet even the dogs under the table eat the children’s crumbs.” And he said to her, “For this statement you may go your way; the demon has left your daughter.”  And she went home and found the child lying in bed and the demon gone. – Mark 7:24-30

If you’re going to read this passage through modern evangelical eyes (Jesus’ mission is to get people ask Him into their heart), then He frankly comes off as a racist who’d rather insult a hurting woman than save her. I don’t think too many people would put it that way, but everything’s there to make the point. But if you read it through biblically-informed eyes, especially informed by the milieu of the second temple period, you’ll see that the personal vocation of Jesus was not to spread the gospel of the kingdom to the Gentile world. It was to tell the Jews that their long-awaited Messiah was at hand. Israel was to be redeemed first and then the rest of the world would be brought under the rule of Israel’s God.

Jesus is in “the region of Tyre and Sidon,” which is a Gentile area a little north of Galilee. “And he entered a house and did not want anyone to know.” He seems to be keeping a lower profile after all the miracles with the crowds and saying some pretty controversial things about purity laws and food. This woman comes and “begged him to cast the demon out of her daughter.” His response is an apparent insult: “Let the children be fed first, for it is not right to take the children’s bread and throw it to the dogs.” Jews often thought of Gentiles as “dogs,” and Gentiles had a few choice things to call the Jews as well.

This is a sharp reminder that Jesus wasn’t a miracle man who went around doing as much social good as He could. He has a specific mission and will not allow Himself to be drawn away from it in the limited time He has. He is called to difficult and dangerous tasks and must proceed carefully. His messianic vocation will lead Him to the cross at just the right time, so he is not a universal problem-solver or even trying to spread the healing message of the gospel as widely as possible.

Nevertheless, this woman has a great come-back line. “Yes, Lord; yet even the dogs under the table eat the children’s crumbs.” And it worked. He basically replies, “Well played! Off you go to find the demon has left your daughter.” This is where the previous passage in Mark about cleanness and uncleanness is connected. This Gentile “dog” is an example of the old barriers, the old taboos, being put away. She has more than crumbs under the table. She, like so many other Gentiles, are going to find a seat at the table itself.

And thus Paul can write, “For he himself is our peace, who has made us both one and has broken down in his flesh the dividing wall of hostility.” And that’s the gospel!