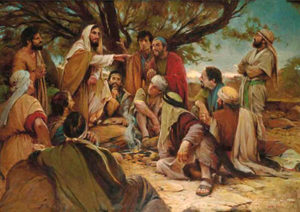 We will worship this Saturday evening, April 23, due to the OKC Memorial Marathon completely shutting down the streets several blocks out from the church building. Dinner is at 5:00 followed by worship at 6:00. There will be nursery available, but no Sunday school that weekend. All are welcome!

And he called the twelve and began to send them out two by two, and gave them authority over the unclean spirits. He charged them to take nothing for their journey except a staff–no bread, no bag, no money in their belts– but to wear sandals and not put on two tunics. And he said to them, “Whenever you enter a house, stay there until you depart from there. And if any place will not receive you and they will not listen to you, when you leave, shake off the dust that is on your feet as a testimony against them.” So they went out and proclaimed that people should repent. And they cast out many demons and anointed with oil many who were sick and healed them. – Mark 6:7-13

Have you ever wondered about why Jesus didn’t even let the Twelve take a small bag and a little money with them on their mission? Would it really have been so indulgent to take a couple of slices of bread? Furthermore, should this be how preachers and missionaries should live today? The answer is that it would not have been indulgent to take supplies and it is not a directive for how the ministers of Christ should necessarily live today. That is because their instructions are symbolic of the urgency of the message, the emergency instructions for a swift and dangerous mission.

While they brought healing to distressed souls by casting out unclean spirits and healing the sick, the central focus of their task was to be kingdom-heralds. People needed to get ready for the coming destruction of Jerusalem, which is to say, the coming destruction of earthly Israel and all the practices of Old Covenant shadows. Getting ready meant repenting, which is not simply admitting guilt and feeling bad about it, but repenting meant changing one’s entire worldview and values. The proclamation Jesus sent with them left no room for compromise and there was no time to waste.

Jesus had called and assembled his privy counselors, prophets who have a place on the Divine Council. If people believed their message and showed them hospitality, then those hearers were blessed greatly for their faith. Of course there were those who did not listen to the proclamation and did not show hospitality and they would have no representation by these young prophets, friends of Jesus, and would receive a testimony against them in a solemn symbolic way: shaking off the dust that was on their feet. This was not an act of anger or being childish; it was an act of showing that there is no time to waste since the Kingdom of God was at hand as well as the destruction of their world. The dust that was the food for the serpent will not stick to those of God’s new world. Woe to those who missed this golden opportunity!

We too have an urgent mission to preach repentance. Just as the Great Moment was coming for those in Israel in Jesus’ days on earth, so the Great Moment of His return is at hand. The Lord does not count slowness like we do. The proclamation is that Christ has died, Christ is risen, Christ is coming again. Repent now and turn to God, show hospitality to strangers, wage liturgical war on the Principalities and Powers, anoint the sick with oil, baptize, and proclaim the Lord’s death in the Supper until He comes. And that’s the gospel!