May 1: The Sixth Sunday of Easter 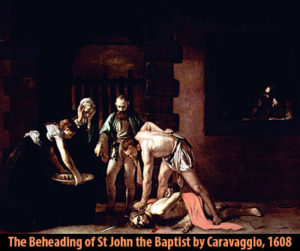 King Herod heard of it, for Jesus’ name had become known. Some said, “John the Baptist has been raised from the dead. That is why these miraculous powers are at work in him.” But others said, “He is Elijah.” And others said, “He is a prophet, like one of the prophets of old.” But when Herod heard of it, he said, “John, whom I beheaded, has been raised.” – Mark 6:14-16

Communication is fast these days. Some of the digital billboards along interstate highways in our city will post tweets from Twitter on current events. Within minutes of the occurrence we are informed of the death of an entertainment idol or the incident of an earthquake on the other side of the planet, even without radio or television. It’s amazing—maddening sometimes—but truly amazing.

Somehow word-of-mouth was able to get news of Jesus’ mighty works to King Herod. First-century Palestine, without newspapers or even one single electronic device, still spread news. Mark indicates that rumors were going around that maybe this man was Elijah. This is not without scriptural support since Elijah didn’t die but rode a chariot of fire directly into heaven, and Malachi 4:5 says that he would return. In other grist for the rumor mill, some were saying that Jesus was like one of the prophets of old. There are probably other suggestions that Mark didn’t record for us.

Herod has his own theory though: John the Baptizer was raised from the dead. I doubt that Herod held a precise doctrine of resurrection, but it was an idea running around in their world at the time. Herod (the Great) was a rather paranoid man, even killing people in his own family when he felt threatened. John was beheaded at the request of an erotic dancer (Mark actually digresses to tell the story after the passage copied above). Perhaps, like father-like son, Herod (the younger’s) paranoia was getting the better of him since he knew John was a righteous man and had been afraid to murder him.

Whatever the case, this is what Herod thought. It shows that Jesus was indeed doing some very mighty works, forcing people to unlikely explanations as well as to taking notice. Interestingly, as we’ve seen in previous examples in Mark, this is a sandwich story. The passage copied above, along with the following story of how John came to be martyred, is sandwiched in the midst of the account of Jesus sending out the Twelve to preach repentance, cast out demons, and heal the sick. In the previous sandwich stories, we’ve seen how the separate stories relate to each other and expose some things that their “sandwiching” reveals that otherwise would go unnoticed.

Inserting the story of John’s death inside a story on mission reveals something about the disciples’ work. When Jesus sends you on a mission, you might end up like John! Not only that, but this foreshadows Jesus’ death, who is also sent to proclaim the kingdom, but will not do so without suffering even unto martyrdom. Mark has a purpose throughout which is to show that Jesus is the shepherd-warrior-king, the Greater David. In v. 14 above, Mark calls Herod “King Herod.” Herod is the “king of the Jews.” But Jesus is the true king, compassionate about sheep without a shepherd. Herod is a false shepherd who devours the prophets, while Jesus is the true Shepherd-King who feeds His people. And that’s the gospel!