April 3: The Second Sunday of Easter 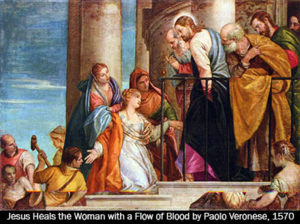 A great crowd followed him and thronged about him. And there was a woman who had had a discharge of blood for twelve years, and who had suffered much under many physicians, and had spent all that she had, and was no better but rather grew worse. She had heard the reports about Jesus and came up behind him in the crowd and touched his garment. For she said, “If I touch even his garments, I will be made well.” And immediately the flow of blood dried up, and she felt in her body that she was healed of her disease. And Jesus, perceiving in himself that power had gone out from him, immediately turned about in the crowd and said, “Who touched my garments?” And his disciples said to him, “You see the crowd pressing around you, and yet you say, ‘Who touched me?’” And he looked around to see who had done it. But the woman, knowing what had happened to her, came in fear and trembling and fell down before him and told him the whole truth. And he said to her, “Daughter, your faith has made you well; go in peace, and be healed of your disease.” – Mark 5:24-34

The passage above is another one of Mark’s “sandwich stories” where he begins a story, but interrupts it with another story and returns later to the original. Though completely different stories, what they have in common (especially in symbolic ways) sheds additional meaning on them both. It is fascinating.

In this scene there is a woman who had female bleeding and “who had suffered much under many physicians, and had spent all that she had, and was no better but rather grew worse.” It’s not difficult to see that she was hopeless physically and financially. She suffered as much or more from the cures as she did from the disease. This, however terrible, is not her biggest problem. According to Leviticus, she was ceremonially unclean in a special way. Leviticus indicates (chapters 11 & 15) that she could make anything she touched into the ceremonial equivalent of a carcass. She is as good as dead, and death might be an improvement for her.

For twelve years she had been barred from participating in the annual sacramental meals of the Old Covenant: Passover, Pentecost, the Feast of Booths. She cannot even think about going to Jerusalem in her unclean condition. If she cannot find healing and cleansing, she is exiled from the presence of God, and that’s death!

She has no business touching anyone, which is why she “came in fear and trembling.” This “great crowd” was there to follow and “thronged” Jesus, and she reaches out and touches Him. She believes He will make her well, apparently even if He doesn’t know it. He does know it, but that was a surprise. It’s inspiring, but is it a little superstitious?

She already knew that Jesus does touch unclean people without becoming unclean Himself. She may have inferred that the principles of uncleanness from Leviticus did not operate the same way with Jesus. Haggai 2 indicates that in the Old Covenant shadows that death spread but life did not. Jesus is the opposite. Death was not a problem for Him; it did not spread to Him. He cleanses and thus spreads life around.

Of course we know that it was Jesus’ power that healed her, though we should not shy away from His unambiguous statement: “Daughter, your faith has made you well.” Her faith, though itself powerless, is the instrument through which Jesus’ power works. It’s a good lesson for us. When life crowds in with all its anxieties and disappointments, there is still room for us to creep up behind Jesus and “touch” Him by faith. It’s a strange mixture of fear and faith in this life of Christian discipleship, but He is there for those who are hopeless in their own strength to spread life around. That’s the gospel!