April 17: The Fourth Sunday of Easter 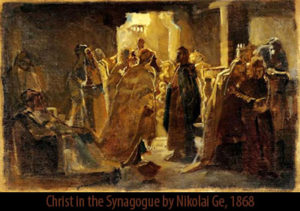 He went away from there and came to his hometown, and his disciples followed him. And on the Sabbath he began to teach in the synagogue, and many who heard him were astonished, saying, “Where did this man get these things? What is the wisdom given to him? How are such mighty works done by his hands? Is not this the carpenter, the son of Mary and brother of James and Joses and Judas and Simon? And are not his sisters here with us?” And they took offense at him. And Jesus said to them, “A prophet is not without honor, except in his hometown and among his relatives and in his own household.” And he could do no mighty work there, except that he laid his hands on a few sick people and healed them. And he marveled because of their unbelief. And he went about among the villages teaching. – Mark 6:1-6

This passage comes as a kind of bridge between the astonishing miracles and the sending out of the Twelve on their first mission. If you remember back in Mark chapter 1, we are told that “Jesus came into Galilee, proclaiming the gospel of God, and saying, ‘The time is fulfilled, and the kingdom of God is at hand; repent and believe in the gospel.'” (Mark 1:14,15) This was right before He called the first four disciples (Simon, Andrew, James, and John), and then went to the shore of the Sea of Galilee in order to call Levi/Matthew. Then Jesus “healed many” and taught from a boat (so he wouldn’t be crushed by the crowd) right before He called the Twelve.

So it would be reasonable to expect that this new calling of the Twelve for their mission would be immediately preceded by a significant scene of teaching and healing. He goes to Nazareth, His hometown, to do it. Jesus has just performed His greatest miracle yet in raising Jairus’ daughter from the dead, yet He goes to Nazareth and is rejected. He utters a famous saying, “A prophet is not without honor, except in his hometown and among his relatives and in his own household.” This translation, though technically correct, might be a little clunky. Another translation to help us hear what they did would be, “Prophets have honor everywhere except in their own hometown, their own family, and their own household.”

There is a startling statement in this passage, “And he could do no mighty work there, except that he laid his hands on a few sick people and healed them.” Being a preacher myself, I’ve wondered if the faith of the hearers affects the power of the preaching. At one level, it doesn’t seem like it should work that way. The sermon is the sermon, and the Holy Spirit does with it as He pleases. But at another level, there is something about the esteem of the preacher and the faith of the hearers that affects efficacy. If their lacking faith and low esteem of Jesus meant, “He could do no mighty work there, except” just a few smaller things, then how much more should preachers today have a similar experience!

They talked badly about Jesus (“Isn’t he the handyman?”) and consequently missed out on some of God’s blessings. It’s probably worth considering: “How does what I say in front of other people about a preacher affect their ability to receive God’s good gifts through that preacher?” Admittedly, I haven’t thought about this much before, but Mark’s passage here should give us all a cautionary pause.

But the thing that strikes me most is that Mark tells us that Jesus “marveled because of their unbelief.” This has context not to be missed because Jairus and his wife also marveled at the resurrection they had beheld (5:42). Could Jesus be amazed at unbelief? Yes, indeed. And that gives us a hint at what will happen following the second resurrection in Mark’s gospel: unbelief. Let us remember that the faith of the woman with 12 years of bleeding saved her. The faith of Jairus led him to see a 12-year-old dead girl get up and eat with Jesus. And the faith of 12 disciples will raise a new bride, clean and alive, for Jesus. And that’s the gospel!