April 10: The Third Sunday of Easter 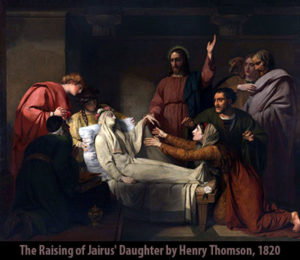 While he was still speaking, there came from the ruler’s house some who said, “Your daughter is dead. Why trouble the Teacher any further?” But overhearing what they said, Jesus said to the ruler of the synagogue, “Do not fear, only believe.” And he allowed no one to follow him except Peter and James and John the brother of James. They came to the house of the ruler of the synagogue, and Jesus saw a commotion, people weeping and wailing loudly. And when he had entered, he said to them, “Why are you making a commotion and weeping? The child is not dead but sleeping.” And they laughed at him. But he put them all outside and took the child’s father and mother and those who were with him and went in where the child was. Taking her by the hand he said to her, “Talitha cumi,” which means, “Little girl, I say to you, arise.” And immediately the girl got up and began walking (for she was twelve years of age), and they were immediately overcome with amazement. And he strictly charged them that no one should know this, and told them to give her something to eat. – Mark 5:35-43

This is the second part of the sandwich story Mark offers. In the first part, we were introduced to Jairus, a ruler of the synagogue, and found out that his young daughter is dying. He desperately implores Jesus to help, and Jesus goes with him to Capernaum amidst the crowds who were all over the place. On the way—and it must have been filled with urgency since the girl was dying—Jesus encounters a woman who has had an issue of blood for 12 years. She too is desperate and ceremonially barred from the presence of God without hope of remedy. She is symbolically a dead woman. Nonetheless, she touches Jesus and is saved. It’s as though she has been resurrected.

It’s a great story that teaches us many things about Jesus, but the problem is that it took some time and we find out that Jairus’ daughter is now dead. The resurrection of a woman has possibly led to the death of another. What will Jesus do? Of all things, He tells Jairus without much of an empathetic response, “Don’t be afraid…just believe.” I mean, who would do that! Someone with the power of resurrection; that’s who. And so Jesus and the closest disciples go to the house and see the commotion of grief. Jesus will have none of it and says that the child is not dead but sleeping. And they laughed at him. People are still laughing at Jesus to this day.

Why does Jesus say that the child is asleep rather than dead? Mark doesn’t want us to forget a few scenes ago in the parable of the growing seed: “The kingdom of God is as if a man should scatter seed on the ground. He sleeps and rises night and day, and the seed sprouts and grows; he knows not how” (4:26-27). And now that’s what will happen to this girl as a further sign that the kingdom of God is breaking in upon Israel in the unlikely form of a young rabbi doing extraordinary things in one little town down by the lake. Of course, it tells us, too, how the story will end. A lot of people are going to marvel at the place where there was a dead body, but which lies there no more! And that’s the gospel!