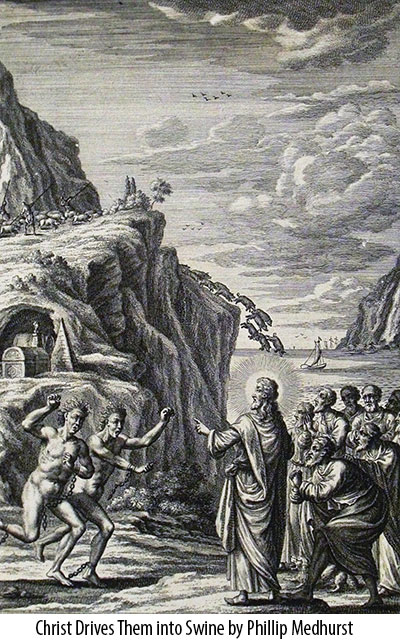 They came to the other side of the sea, to the country of the Gerasenes. And when Jesus had stepped out of the boat, immediately there met him out of the tombs a man with an unclean spirit. He lived among the tombs. And no one could bind him anymore, not even with a chain, for he had often been bound with shackles and chains, but he wrenched the chains apart, and he broke the shackles in pieces. No one had the strength to subdue him. Night and day among the tombs and on the mountains he was always crying out and cutting himself with stones. And when he saw Jesus from afar, he ran and fell down before him. And crying out with a loud voice, he said, “What have you to do with me, Jesus, Son of the Most High God? I adjure you by God, do not torment me.” For he was saying to him, “Come out of the man, you unclean spirit!” And Jesus asked him, “What is your name?” He replied, “My name is Legion, for we are many.” And he begged him earnestly not to send them out of the country. Now a great herd of pigs was feeding there on the hillside, and they begged him, saying, “Send us to the pigs; let us enter them.” So he gave them permission. And the unclean spirits came out, and entered the pigs, and the herd, numbering about two thousand, rushed down the steep bank into the sea and were drowned in the sea. – Mark 5:1-13

After crossing the Sea of Galilee through a mighty storm that Jesus calmed, which provided a wonderful lesson on suffering in His kingdom, as well as revealing Him as the true and greater Jonah, they arrive on the east side of the Sea. This was contested land then, and it is to this day, as it rises sharply up to the Golan Heights. Most of all, this was Gentile land, that is to say, Roman neighborhood land. Certainly the Romans had control of Israel, but here they had really set up shop to the point that they were keeping pigs. It would not have been lost on Mark’s original audience that the pigs were not incidental to the story: the Romans symbolically are the pigs!

This man is taken over by a (Roman) legion of demons and says so. He dwells in a graveyard, a place of contamination that made you ceremonially unclean. Likewise, he is unclean because of his own blood as he cuts himself. He has less dignity than animals, naked, shrieking, and he is completely isolated from the community, not unlike the leper we saw earlier in Mark’s gospel. He is gripped externally and internally and is headed for self-destruction and death. That is what Satan has to offer, by the way.

It is difficult to say for sure why Jesus went to this place, but once there, He is immediately known to the demon(s) and, as is consistent with previously similar scenes, begs Jesus to leave him alone. Jesus isn’t going to do that, but curiously answers the unclean spirit’s request to be sent to the pigs. Whether or not the unclean spirit realized that the drowning of the pigs was coming is speculation. That’s what happened, though, to 2,000 pigs! Symbolically the wicked Romans had come from the sea to terrorize and inhabit the land, and now they’ve been sent back to where they came from.

However, the big picture must not obscure the littler picture. This was one man in deep distress, and Jesus met his need and healed his distress. This is what Jesus does, and we must work never to forget it and, rather, to proclaim it to all who will listen. Jesus restores the isolated, naked, self-destroying person to dignity, community, and abundant life. The strong man—Satan–steals, kills, and destroys. The Stronger Man—Jesus, gives life and life abundantly. Jesus, the shepherd-warrior-king, has once again plundered the strong man’s house in delivering this man.

The man wants to stay with Jesus, but Jesus sends him to the Decapolis cities (v. 20) to tell “how much the Lord has done for you.” These 10 cities are Roman cities, and so we have, well before the Apostle Paul comes along, the first apostle to the Gentiles. This man went from being one of the least important people in the world to the most important. That’s what Jesus does for His sons and daughters. That’s the gospel!