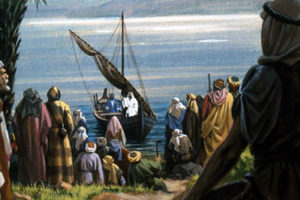 Jesus withdrew with his disciples to the sea, and a great crowd followed, from Galilee and Judea and Jerusalem and Idumea and from beyond the Jordan and from around Tyre and Sidon. When the great crowd heard all that he was doing, they came to him. And he told his disciples to have a boat ready for him because of the crowd, lest they crush him, for he had healed many, so that all who had diseases pressed around him to touch him. And whenever the unclean spirits saw him, they fell down before him and cried out, “You are the Son of God.” And he strictly ordered them not to make him known. – Mark 3:7-12

I’ve seen video of people being trampled at sporting events, especially soccer matches. Someone in our church recently told me of a crowd experience they had had where a moment of panic set in and they were fearful of the same thing happening to them. I can’t help but think something like that is a real danger in Mark’s passage above. Jesus actually has to give instructions to have a boat ready because the crowd might crush him! That’s easy to read over as an interesting, but otherwise incidental, detail; however, if you picture it, the scene is remarkable.

Word certainly got around fast. Without a single electrical device or mechanically duplicated piece of paper, people came “from Galilee and Judea and Jerusalem and Idumea and from beyond the Jordan and from around Tyre and Sidon.” That’s pretty much everywhere. Yes, there were whose “who had diseases,” but Mark, writing an apocalyptic gospel, tears back the curtain to show that there is always a darker and deeper something behind the scenes. The powers of darkness seem to be at least as big a problem as the need for medical treatment or healing.

Mark uses the term “the unclean spirits” to let us know that they are non-physical powers that work in a person, and that they make the person they inhabit defiled or “unclean.” Notice Mark says “whenever the unclean spirits saw him, they fell down before him….” What did this look like? Did the demon come out of the person, take on a bodily form, and bow down? No, the inhabited person would bow down and that person’s voice would cry out, “You are the Son of God.”

Picture it: people were coming for healing, but when they came into the presence of a power as great as Jesus, people cried out. Mark lets us know what’s really going on, but the scene must have been amazing with masses of people crying out, “You are the Son of God.” What they have to say is Jesus’ true identity. It’s doubtful that the crowds knew that going in, thus it is being revealed by demons (of all things!). Perhaps even the disciples were learning in a more precise way that this is the Messiah, the true King of Israel.

What Jesus was doing there at the Sea of Galilee is what He is doing today: bringing New Creation to make people new. He’s not making them “brand” new, but restoring what has been lost in the fall. Not one of us behaves as we were created to function, but Jesus corrects that. With New Creation comes true humanity. We were not created to get sick or die or be inhabited by defiling spirits. We were created to live forever free of disease and death, clean and holy, to have life, and abundantly so. That’s what Jesus was doing way back then, and it’s what He’s doing now, even in 21st-century America. And that’s the gospel!