February 28: The Third Sunday in Lent 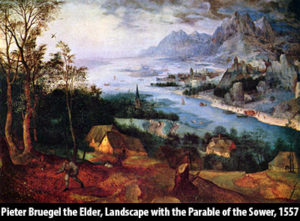 Again he began to teach beside the sea. And a very large crowd gathered about him, so that he got into a boat and sat in it on the sea, and the whole crowd was beside the sea on the land. And he was teaching them many things in parables, and in his teaching he said to them: “Listen! A sower went out to sow. And as he sowed, some seed fell along the path, and the birds came and devoured it. Other seed fell on rocky ground, where it did not have much soil, and immediately it sprang up, since it had no depth of soil. And when the sun rose, it was scorched, and since it had no root, it withered away. Other seed fell among thorns, and the thorns grew up and choked it, and it yielded no grain. And other seeds fell into good soil and produced grain, growing up and increasing and yielding thirtyfold and sixtyfold and a hundredfold.” And he said, “He who has ears to hear, let him hear.” – Mark 4:1-9

I once saw a political cartoon showing a giant, Godzilla-sized elephant and a similarly-sized donkey both appearing to be in the process of destroying the great dome of the US Capitol building. I wondered if someone a thousand years from now found the cartoon in the excavation of a garbage heap would wonder what kind of superstitious and primitive people we were to produce such art. Of course we know that it is a kind of artistic representation of a rather advanced civilization. But if you don’t have the kind of eyes to see that sort of thing, it must seem really weird.

That’s the way Jesus’ parables work and He means to use them that way. They are often politically incorrect, i.e., they are out-of-step with the prevailing culture’s commonly held values and hopes. Jesus’ vision of how God was sowing his word surely won’t set well with the Jerusalem-centric leadership, but it isn’t going to play well with ordinary citizens of Israel either. They wanted the kingdom of God to come in a blaze of glory that all the world would bow before in awe. Jesus is saying it’s more like a farmer sowing see, most of which apparently goes to waste because the soil isn’t fit for it anyway.

Things haven’t really changed. Ironically, if you’ve heard this passage preached as being about how people listen to sermons (“be the good soil so you’ll hear the sermon and it will stick with you”), then the preacher supposedly preaching the word has actually had the meaning hidden from him. That is not what the passage is about, at least when Jesus said it. For Jesus, the parables are partly meant to divide (those who get it and those who don’t) and they still do that today.

The sower sowing seed was obviously something with which the original audience was very familiar, but it goes back further than that. In the prophets, especially, God is sowing Israel again in her own land after the long years of exile. The fortunes of His people are being restored, the cypress is replacing thorns, the myrtle is replacing briars, trees and clapping their hands, and it sometimes even looks like maybe Eden is possible again. The familiar Isaiah statement, “The grass withers and the flower fades, but the word of our God will stand forever,” indicates that the word being sown will overcome death and curse. In fact, all will be made new.

The first three types of soil are not meant to symbolize three different types of unregenerate hearts. Israel has been planted, but the seed has gone bad because of bad ground. In the second soil, you find the Pharisees, the Zealots, and the disciples who want Him to reject the cross. The third soil is the Herodians and Sadducces and Judas who are in it for the money. The good soil is Christians who continually repent and believe (those in Jesus’ day right up to our own).

We usually think of the good news of the gospel as being the content of the work of Jesus Christ. And it certainly is, but it is also good news to know that you have ears to hear. That means your deafness from idolatry has been restored and you are now exactly the kind of soil in which the Kingdom of God takes root and grows until the knowledge of the glory of the Lord covers the earth as the waters cover the sea. And that’s the gospel!