February 14: The First Sunday in Lent 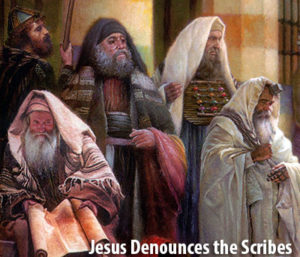 Then he went home, and the crowd gathered again, so that they could not even eat. And when his family heard it, they went out to seize him, for they were saying, “He is out of his mind.” And the scribes who came down from Jerusalem were saying, “He is possessed by Beelzebul,” and “by the prince of demons he casts out the demons.” And he called them to him and said to them in parables, “How can Satan cast out Satan? If a kingdom is divided against itself, that kingdom cannot stand. And if a house is divided against itself, that house will not be able to stand. And if Satan has risen up against himself and is divided, he cannot stand, but is coming to an end. But no one can enter a strong man’s house and plunder his goods, unless he first binds the strong man. Then indeed he may plunder his house.

“Truly, I say to you, all sins will be forgiven the children of man, and whatever blasphemies they utter, but whoever blasphemes against the Holy Spirit never has forgiveness, but is guilty of an eternal sin”– for they were saying, “He has an unclean spirit.” – Mark 3:20-30

I’ve lost count of how many Christians I’ve known over the years who have told me that they were either chronically worried they had committed the “unforgivable” (or “eternal”) sin or that they were acutely sure that they had. One fellow told me that he had uttered some choice words involving the Holy Spirit during an episode of not being able to get his lawn mower to start that he feared had sealed his eternal doom.

While it is a dreadful thing to speak a word against the Lord even during lawn mower sufferings, the passage above indicates that such a sin alone is not the unforgiveable sin. The context is that scribes do not like what Jesus is doing, especially since His popularity is growing. He is not ordained in their presbytery, so this will never do. They want to label Him in such a way that no one will ever listen to Him again. The strategy is to show that He is in cahoots with the arch-demon, Beelzebul. Perhaps Jesus can do all these amazing things because Beelzebul inhabits Him. While evil, this plan has a good chance of working. Problem is, of course, that Jesus effortlessly outsmarts them.

Jesus doesn’t start to expose who the scribes really are. He doesn’t call them names or label them in kind. Instead he calmly points out the flaw in their suggestion: “How can the Accuser cast out the Accuser?” This is a war, and if it’s an internal war (a “civil” one) then victory is impossible. The house cannot stand and will come to an end. It is impossible that Jesus will win with His current course of action in casting out demons if He is the Five-Star General of Demons, Beelzebul.

But Jesus is not merely on the defensive against their claims. He provides the Parable of the Strong Man to allow those who have ears to hear that there is a war going on, and it involves the Accuser and his minions. Rather than cooperating with that evil army, Jesus is lining up his forces (comprised shockingly of tax collectors, fisherman, and “sinners”) against the kingdom and army of Satan.

It’s at this point that Jesus offers the warning concerning the “eternal sin.” It is eternal because once you go there, you’ll never go back. You will be blind to the truth. The scribes were suggesting a conspiracy that Jesus was involved in. Believe in that conspiracy and no matter what Jesus does, you’ll attribute it to Satan. How terrible! You’d be hopelessly stuck in calling good evil and evil good and powerless to see it any other way.

Even the scribes aren’t there yet. They have more opportunity for repentance. Rejection of Jesus, as dreadful as that is, does not bring instantaneous, permanent condemnation. But time will run out. For the scribes of the original audience of this passage, Pentecost is coming when time will run out for Israel. That’s when the Holy Spirit will baptize with fire, and they’d better be ready. Proverbs 29:1, He who is often reproved, yet stiffens his neck, will suddenly be broken beyond healing.

Repentance must be like voting in Chicago: early and often! Jesus is telling them and all of us to repent the first time. He is slow to anger and abounding in steadfast love; today if you hear His voice, do not harden your hearts. And that’s the gospel!