January 31: The Fourth Sunday after the Epiphany 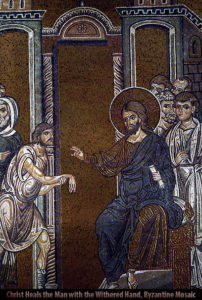 Again he entered the synagogue, and a man was there with a withered hand. And they watched Jesus, to see whether he would heal him on the Sabbath, so that they might accuse him. And he said to the man with the withered hand, “Come here.” And he said to them, “Is it lawful on the Sabbath to do good or to do harm, to save life or to kill?” But they were silent. And he looked around at them with anger, grieved at their hardness of heart, and said to the man, “Stretch out your hand.” He stretched it out, and his hand was restored. The Pharisees went out and immediately held counsel with the Herodians against him, how to destroy him. – Mark 3:1-6

As I was growing up, my maternal grandmother spoke in venerated terms of “Brother Morris,” a preacher at the First Baptist Church in Ada, Oklahoma. During his tenure he was able to get the town’s movie theater closed on Sundays. While that didn’t last beyond his pastorate there, even as late as the 1970s I remember very few businesses open on Sunday—unlike today when someone like Chick-Fil-A is viewed suspiciously for their Sunday closing policy. While I was in seminary, there were debates among students about what is “lawful” to do on Sunday as well, which continues among pastors. The Westminster Confession of Faith (subscribed to by many Reformed folk) states rather sternly:

“This Sabbath is then kept holy unto the Lord, when men, after a due preparing of their hearts, and ordering of their common affairs beforehand, do not only observe an holy rest, all the day, from their own works, words, and thoughts about their worldly employments and recreations, but also are taken up, the whole time, in the public and private exercises of his worship, and in the duties of necessity and mercy.” (chapter 21, paragraph 8)

In the bible passage from Mark above, we can see that Sabbatarian arguments have been going on a long time. It seems that most American Christians today are either muddled on the issue or have completely given up even attending worship on the Lord’s Day, seeing it as “the best of the seven” only because it provides time and space for more self-indulgence than usual!

We could talk about the relationship between the Seventh Day and the First Day and how the vast majority of Christians came to worship on the First Day, but it’s more valuable to think about what the Sabbath Day meant. For ancient Israel, the Sabbath looked forward to the freedom to come, of hope for the great Day of Rest when all pagan oppression would cease. It looked backward to the creation of the world, to the Exodus, and was a day marked out for those who keep it as God’s chosen people, His faithful and hopeful people.

For the original audience in Jesus’ day, it had become a great hammer and symbol of nationalism. It no longer envisioned Israel as the light of the world, but simply as the light and the rest of the world as darkness. This happens when religion and nationalism are entangled. It was doubtless a no-win situation when it came to celebrating God’s creation and redemption, past, present, and future. The letter meant much more than the spirit of the law.

Jesus gets right in the middle of it by healing the man with the withered hand on the Sabbath. Jesus knew that the Pharisees were hard-hearted and stiff-necked. They could not even see, much less celebrate that God had sent his Messiah. So Jesus puts it starkly, “Is it lawful on the Sabbath to do good or to do harm, to save life or to kill?” This is irony at its best. “Is it legal to do good, or shall only doing evil be lawful?” Thus “they were silent.” If the Sabbath speaks of creation and redemption, the answer is obvious, but they couldn’t admit it without contradicting themselves.

He had made His Messianic claim of the dawning of a new day where even the Law would be seen in a new light. The kingdom is breaking in and the time is coming when people are restored every day and forever. It is eternal Sabbath of rich feasting with the Son of David who is the Son of Man who is the Lord, even of the Sabbath. And that’s the gospel!