January 3: The Second Sunday of Christmas 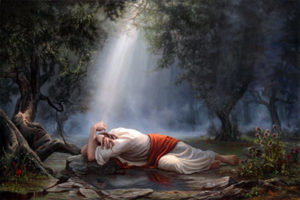 That evening at sundown they brought to him all who were sick or oppressed by demons. And the whole city was gathered together at the door. And he healed many who were sick with various diseases, and cast out many demons. And he would not permit the demons to speak, because they knew him.

And rising very early in the morning, while it was still dark, he departed and went out to a desolate place, and there he prayed. And Simon and those who were with him searched for him, and they found him and said to him, “Everyone is looking for you.” And he said to them, “Let us go on to the next towns, that I may preach there also, for that is why I came out.” And he went throughout all Galilee, preaching in their synagogues and casting out demons. – Mark 1:32-39

In thinking about Jesus’ parables, I’ve noticed that Jesus didn’t try to speak as clearly as he could. That’s something of an arresting thought for me since, as an American pastor in the twenty-first century, I feel like a big part of my goals, indeed much of people’s expectations of my effectiveness, is speaking in a way that is immediately accessible to every person, regardless of education, age, experience, or even interest. That doesn’t describe Jesus’ preaching much at all. He regularly spoke in parables and with other rhetorical devices that were meant as much to conceal His meaning as to reveal His meaning to the audience.

That’s rather closely related to the idea of crowds. While I am glad to say that bigger is not necessarily better, it must be conceded that I would rather go to the restaurant that takes reservations than the one where I can find a seat immediately at any time. Americans with Evangelical identities tend to believe that having throngs of people coming for the preacher, or at least the church leadership, means that is the better place to be. Jesus, though, in the passage above and a number of other places in the gospels, eschews crowds of people. Think of it: Jesus did not try to reach as many people as possible, and when He did speak to those around Him, He didn’t try to get everyone to understand what He was saying!

The passage above comes immediately after Jesus heals Simon’s mother-in-law from her fever and she rises up and starts feeding everyone. That evening “the whole city was gathered together at the door.” What a scene! And He does heal the sick and free those seized by demons. But then He slips out before sunrise and goes to a desolate place to pray. It’s not surprising that throngs came to Jesus, but it may be a little shocking that many people who felt they needed Jesus were left behind by Him. His prayer was more important to him than more healings and exorcisms.

Where it gets really interesting is that Mark says, “Simon and those who were with him searched for him.” The Greek for “searched for him” means “hunt him down.” Again, in keeping with Mark’s theme of Jesus as the greater David, the Greek translations of the Hebrew scriptures where wicked King Saul pursues David literally means stalks him down, and is the same as the disciples’ hunting Jesus down. There’s nowhere in the Older Testament where it is used for anything other than to describe a hostile pursuit. This lets us know that Simon’s declaration to Jesus, “Everyone is looking for you,” wasn’t in the kindest, most patient tone of voice.

As far as we can tell from Mark, Jesus never even goes back to that town. The question is why Jesus wanted to get away from them and not heal as many people as He could have. The text gives us the answer to both parts. As to what His motivation was to get away from the crowds, it is plain that He wanted to get away to pray. Jesus, the Son of God, the Second Person of the Trinity, needed to pray. He needed to pray more than do what otherwise would be good works. We should consider this well concerning our own lives. If Jesus required solitary, contemplative prayer, how much more do we! Our world doesn’t encourage this; we should repent and rebel against the busy-ness of modern life that would prevent similar prayer as part of our ordinary patterns of living.

The second part of the question concerns why Jesus didn’t heal as many people as He could have. Again, Mark quotes Jesus’ answer unmistakably: “Let us go on to the next towns, that I may preach there also, for that is why I came out.” Jesus didn’t mainly come out to heal people, but to preach. Real healing, that is to say, healing that lasts, is not going to come in this present life. The people Jesus healed eventually got sick again and died. The healing that lasts would come through faith in the gospel Jesus preached. It is a message of righteousness that comes by faith, an announcement of the victory of Jesus himself, and a fulfillment of the long-awaited promise of God to make all things new. That’s what they needed more than anything else. And that’s the gospel!