December 27: The First Sunday of Christmas 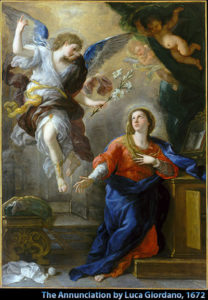 In the sixth month the angel Gabriel was sent from God to a city of Galilee named Nazareth, to a virgin betrothed to a man whose name was Joseph, of the house of David. And the virgin’s name was Mary. And he came to her and said, “Greetings, O favored one, the Lord is with you!” But she was greatly troubled at the saying, and tried to discern what sort of greeting this might be. And the angel said to her, “Do not be afraid, Mary, for you have found favor with God. And behold, you will conceive in your womb and bear a son, and you shall call his name Jesus. He will be great and will be called the Son of the Most High. And the Lord God will give to him the throne of his father David, and he will reign over the house of Jacob forever, and of his kingdom there will be no end.” And Mary said to the angel, “How will this be, since I am a virgin?” And the angel answered her, “The Holy Spirit will come upon you, and the power of the Most High will overshadow you; therefore the child to be born will be called holy- the Son of God. And behold, your relative Elizabeth in her old age has also conceived a son, and this is the sixth month with her who was called barren. For nothing will be impossible with God.” And Mary said, “Behold, I am the servant of the Lord; let it be to me according to your word.” And the angel departed from her. – Luke 1:26-38

There’s a small town in Israel about six miles south of Jerusalem surrounded today by a high wall with armed soldiers in turrets. Unlike the Palestinian residents of that city, tourists can sometimes go in and out after the bus has been thoroughly searched. A great deal of biblical history happened there especially because it is the City of David. It gets lots of attention.

Nazareth is much more obscure, but one really big thing that took place there (Luke 1:26) is that the same angel who appeared to Zechariah in the temple appeared to the young virgin named Mary. Certainly the old priest Zechariah and his wife heard an amazing announcement, but it can hardly compare with what Mary heard. Elizabeth and Zechariah, well past the age to hope for children, know that the Lord opened the womb of Sarai and Hannah. Those miracles are related, but at least these ancient sisters of ours were married. Mary isn’t yet! She is a virgin and the only explainable way for her to have a child is dishonorable and sinful.

But she is going to have a baby, and it isn’t dishonorable or sinful. Just like the other miracle children given to barren women in the bible, for Mary it is God’s sign that He is starting something new. It’s always been the case that an old couple having their first child means new life. How much more then if a virgin conceives! Surely this is the mark of the beginning of a new creation.

The angel gives more information to Mary than we sometimes notice. She asks a direct question, “How will this be, since I am a virgin?” She receives a direct answer, “The Holy Spirit will come upon you, and the power of the Most High will overshadow you.” Just like the Spirit overshadows the water at the beginning of the world (the Spirit fluttered over the face of the waters) and forms the new creation, the Spirit will overshadow Mary to form a new creation in her womb. This is the womb of the new world. And that makes a lot more sense as to why her song (the Magnificat) contains joy about the overthrow of the wicked rulers of the world and the righteous people of God being exalted.

We’re not talking about a pagan god intervening in the lives of mortals. This God is the one St. Augustine said made us for love, love which will care for us and take us up into His saving purposes. Mary is a great example of what happens when God works by grace through people. His power from the outside and the indwelling Spirit within together bring about things which would be unthinkable any other way. That’s the kind of love He has for His people. And that’s the gospel!