December 20: The Fourth Sunday of Advent 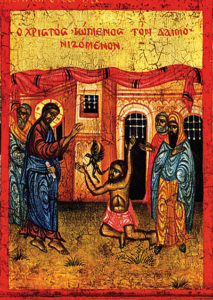 And they went into Capernaum, and immediately on the Sabbath he entered the synagogue and was teaching. And they were astonished at his teaching, for he taught them as one who had authority, and not as the scribes. And immediately there was in their synagogue a man with an unclean spirit. And he cried out, “What have you to do with us, Jesus of Nazareth? Have you come to destroy us? I know who you are–the Holy One of God.” But Jesus rebuked him, saying, “Be silent, and come out of him!” And the unclean spirit, convulsing him and crying out with a loud voice, came out of him. And they were all amazed, so that they questioned among themselves, saying, “What is this? A new teaching with authority! He commands even the unclean spirits, and they obey him.” And at once his fame spread everywhere throughout all the surrounding region of Galilee. – Mark 1:21-28

John the Evangelist says that Jesus’ first miracle, the first of his miraculous signs, is turning water to wine at Cana in Galilee. Mark highlights something else at the beginning of his gospel. After His disciples are called, instead of going into the wilderness for warfare, they enter a synagogue and find out that that’s where warfare is needed! “A man with an unclean spirit” meets them and starts up a conversation. Jesus wages war on this principality, which throws the man into convulsions before leaving.

Now, the careful grammarians among us just thought critically, “Pastor Mark misused ‘principality’ because that’s a place, but this was a demon. In keeping with Ephesians 6:12, he should have used the word ‘power.’” Nonetheless, I would defend myself by stating that Jesus and the disciples may well have entered a principality by going into the synagogue. Notice the unclean spirit’s words: “What have you to do with us, Jesus of Nazareth? Have you come to destroy us?” What’s with the plural “us”?

I think in the past I’ve always thought of the “us” as referring to the company of demons. That makes sense, but is it correct? The company of demons already know what Jesus has to do with them, and that He will at least try to defeat them. The question, if taken as coming from a single unclean spirit on behalf of them all, really doesn’t make that much sense.

What do you think it looked like there in the Capernaum Synagogue? Was it like an American horror movie with a man standing there moving his mouth except producing a voice like James Earl Jones under lots of digital processing? Or was it a man with his own regular voice standing there saying what he wanted to say, but which was actually a demon? With apologies to Hollywood, it was the latter, and I think that changes the scene a lot for most of us. While it is true that a few chapters later Mark tells us about a man who was held by a legion of demons, this one is singular, yet speaks in the plural.

So if the “us” is not the company of demons, who is it? It’s the synagogue. This demoniac perceives Jesus as a threat to the synagogue. As far as we can tell from the text, he is worried that Jesus will mess up their synagogue structure with its meaning, power, etc. And doesn’t this make sense when you consider that John the Baptizer was calling people to repent of relying on Old Covenant shadows and get deliverance? Israel was not their home. They were acknowledging that they were still under bondage in the world, along with its entangled sins. And so they confessed it. The synagogue system was developing as a center of public and religious life in order to expand Judaism out from Jerusalem, and Jesus came to mess all that up. Interestingly, behind the scenes, we find that the Evil One is running things in that principality. As a result, by chapter 3, the synagogue is in a murderous rage, and Jesus is forced to flee and regroup.

Meeting Mark’s purpose, we see Jesus here as the greater David. Wicked King Saul was tormented by a demon, and who was called to exorcise that demon? It was David (1 Sam. 16). Both David and Jesus are filled with the Spirit through anointing, both find an evil spirit tormenting someone, and both are able to remedy the situation. Jesus has, we’re told, “A new teaching with authority! He commands even the unclean spirits, and they obey him.” That’s the gospel!