November 29: The First Sunday of Advent 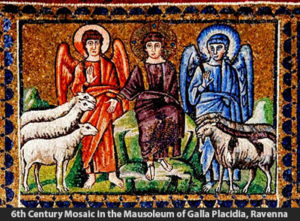 “When the Son of Man comes in his glory, and all the angels with him, then he will sit on his glorious throne. Before him will be gathered all the nations, and he will separate people one from another as a shepherd separates the sheep from the goats. And he will place the sheep on his right, but the goats on the left. Then the King will say to those on his right, ‘Come, you who are blessed by my Father, inherit the kingdom prepared for you from the foundation of the world. For I was hungry and you gave me food, I was thirsty and you gave me drink, I was a stranger and you welcomed me, I was naked and you clothed me, I was sick and you visited me, I was in prison and you came to me.’ Then the righteous will answer him, saying, ‘Lord, when did we see you hungry and feed you, or thirsty and give you drink? And when did we see you a stranger and welcome you, or naked and clothe you? And when did we see you sick or in prison and visit you?’ And the King will answer them, ‘Truly, I say to you, as you did it to one of the least of these my brothers, you did it to me.’

“Then he will say to those on his left, ‘Depart from me, you cursed, into the eternal fire prepared for the devil and his angels. For I was hungry and you gave me no food, I was thirsty and you gave me no drink, I was a stranger and you did not welcome me, naked and you did not clothe me, sick and in prison and you did not visit me.’ Then they also will answer, saying, ‘Lord, when did we see you hungry or thirsty or a stranger or naked or sick or in prison, and did not minister to you?’ Then he will answer them, saying, ‘Truly, I say to you, as you did not do it to one of the least of these, you did not do it to me.’ And these will go away into eternal punishment, but the righteous into eternal life.” – Matthew 25:31-46

Well, Happy Advent to you too! There’s nothing quite like a passage on eternal damnation to really get you in the mood for what the world calls the Most Wonderful Time of the Year! It is a good time and Advent is a good thing because we look and long for the coming of King Jesus. He has come and He is coming. There are two major discourses in Matthew and both end with parables. The Sermon on the Mount ends with the Parable of the Wise and Foolish Builders and the Olivet discourse closes with parables warning His disciples to be prepared for His Coming (24:45-25:30). That’s where this passage falls.

It’s common to think of the event of the separation of the sheep and the goats as being entirely future and involving everyone (you’re either a sheep or a goat—there’s no third option). I wouldn’t argue with the latter, though it’s not exactly what Jesus is saying. Contextually, Jesus warned the Jews at the end of the Sermon on the Mount that their “house” will fall if they do not keep His words. As the story goes, by the time chapter 23 comes along, they have made it abundantly clear that they are not going to keep His words. So, Jesus prophesies that the “house” in Jerusalem will fall with not even one stone being left upon another.

This helps us understand better that the Parable of the Sheep and the Goats is less about the “lost” and the “saved” generally, and more about Israel and the Church. Jesus refers to the operative group here as his “brothers” (“brethren” is a better translation referring to brothers and sisters). He has already identified who the brethren are in chapter 12, While he was still speaking to the people, behold, his mother and his brothers stood outside, asking to speak to him. But he replied to the man who told him, “Who is my mother, and who are my brothers?” And stretching out his hand toward his disciples, he said, “Here are my mother and my brothers! For whoever does the will of my Father in heaven is my brother and sister and mother.”

That’s the church! So in light of this and many other passages, the Parable of the Sheep and Goats is a description of the Jews (or other non-brethren claiming to be God’s) being judged according to their reception of the church (the brethren)! Those in the church are Jesus’ disciples, and what you do for them, you are doing for Him.

It fits too with the Beatitudes from the first discourse as well: poor, mourn, meek, hungering and thirsting. These are Jesus’ disciples, His brethren, and the way you treat them is the way you treat Him. That ought to get our attention. We’re all hungry, thirsty, strange, naked, sick, and imprisoned to something. But, we are to love mercy, and remember with James that visiting widows and orphans in their affliction is pure and undefiled religion. How you treat others in the church counts forever!

The sheep are called righteous in this parable, and it’s because a kingdom was prepared for them from the foundation of the world. They treated each other in the church with kindness, forgiveness, grace and mercy. Consequently, that’s how the Judge of the Nations treats them forever. And that’s the gospel!