September 20: The Seventeenth Sunday after Pentecost 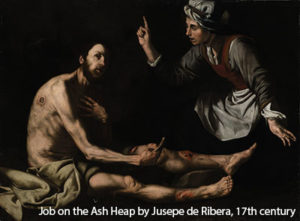 In your struggle against sin you have not yet resisted to the point of shedding your blood. And have you forgotten the exhortation that addresses you as sons? “My son, do not regard lightly the discipline of the Lord, nor be weary when reproved by him. For the Lord disciplines the one he loves, and chastises every son whom he receives.” It is for discipline that you have to endure. God is treating you as sons. For what son is there whom his father does not discipline? If you are left without discipline, in which all have participated, then you are illegitimate children and not sons. Besides this, we have had earthly fathers who disciplined us and we respected them. Shall we not much more be subject to the Father of spirits and live? For they disciplined us for a short time as it seemed best to them, but he disciplines us for our good, that we may share his holiness. For the moment all discipline seems painful rather than pleasant, but later it yields the peaceful fruit of righteousness to those who have been trained by it. — Hebrews 12:4-11

If you want to get people upset around you, just bring up your ideas about disciplining children. There are those who lament the widespread negative attitudes toward spanking in the culture and those who are proud they still use it. You have the time-out people and an abundance of other ideas. I’ve noticed that those who believe in the doctrine of total depravity take rather different approaches to disciplining children than those who believe that people are basically good. That makes sense. I’ve also seen those who began as idealists about “positive discipline” for children eventually abandon trying to “redirect” and trying to focus on the meaning of the behavior and employ some paint stirrer sticks from Home Depot!

Hopefully, however, Christians can agree that we need discipline, and that means being disciplined. It’s what God does and it is a very powerful proof of something, namely, His love. While you may not hear it discussed very often, this passage tells what life is like with God. This discipline comes precisely because He is treating us as His sons and daughters and will not spoil us or ignore us. He simply refuses to let us get away forever with rebellion and folly. Sin and stupidity are not good for us, and He will put a stop to it. If you’ve ever been driven to your knees in repentance because your sin put you into suffering, then you know what I’m talking about.

To be clear, the writer tells us that suffering in our lives, which the Lord uses as discipline, seems painful rather than pleasant. There’s no need to try to dress it up: it hurts; it’s painful. As I’ve said several times before, “The only thing worse than getting the Lord’s discipline is not getting it.” That He does not leave us on our own to go further and further down destructive and life-stealing roads is not just an indicator of His love for us, but proof of it.

The result is that we may share His holiness and yield the peaceful fruit of righteousness. Certainly the Man of Sorrows shared in suffering as He completely identified with us. We must consider Him that we do not lose heart. When we find ourselves disappointed, thwarted, even vilified or subject to violence and social injury, we should, in faith, hear the gentle and wise voice of the Father, urging us to follow Christ more deeply, to mortify sin, and to trust Him fully. That’s because of His love, and that’s what yields the peaceful fruit of righteousness. And that’s the gospel!