July 19: The Eighth Sunday after Pentecost 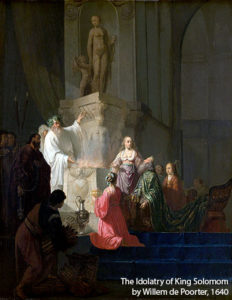 For if we go on sinning deliberately after receiving the knowledge of the truth, there no longer remains a sacrifice for sins, but a fearful expectation of judgment, and a fury of fire that will consume the adversaries. Anyone who has set aside the law of Moses dies without mercy on the evidence of two or three witnesses. How much worse punishment, do you think, will be deserved by the one who has spurned the Son of God, and has profaned the blood of the covenant by which he was sanctified, and has outraged the Spirit of grace? For we know him who said, “Vengeance is mine; I will repay.” And again, “The Lord will judge his people.” It is a fearful thing to fall into the hands of the living God. –Hebrews 10:26-31

One of the aspects of Old Covenant law that has always grabbed my attention is that the animal sacrifices were said specifically to be for unintentional sins. We find this in Leviticus 4, Numbers 15 and other chapters. Hebrews 9:7 states it plainly, The high priest goes, and he but once a year, and not without taking blood, which he offers for himself and for the unintentional sins of the people. There really wasn’t a place for Israelites who deliberately and knowingly flouted the law that defined the people and the nation itself. Of course we know that they did transgress the law knowingly and relentlessly, but Scripture makes clear that people who sinned deliberately, knowing something was sin and doing it anyway, had no sacrifice prescribed for them. Those people were to be “cut off from among the people,” in other words, put to death.

That’s what the writer of Hebrews calls to mind in this section to set the scene for the most dreadful warning about judgment in all the NT except that which comes from the mouth of Jesus himself. What is described here are persons who have come close to Christian faith, i.e., baptized, who have once been enlightened, who have tasted the heavenly gift, and have shared in the Holy Spirit, and have tasted the goodness of the word of God and the powers of the age to come (6:4-5). These persons turn around and publicly deny it all, whether in word or in deed. Chapter 6 also informs us that this may be precipitated by persecution, even coming from non-Christian Judaism. This becomes clearer as the chapter proceeds.

The argument goes like this: if those Israelites of old who set aside the Law of Moses and thus died without mercy, how much worse will it be for those who knew Jesus, but profaned the sanctifying blood and outraged the Spirit of grace! Let me add that the warnings, “Vengeance is mine; I will repay.” And again, “The Lord will judge his people,” are not to inspire fear and dread in sinful yet repenting Christians who remain with Christ. They are warnings for us all never to fall away. I am reminded of Paul Gerhardt’s famous hymn with J.S. Bach’s wonderful music: O make me Thine forever, and should I fainting be, Lord, let me never, never outlive my love to Thee.

We were told in the passage just preceding the one at hand to draw near, to come boldly before the throne of grace. If we remain with Christ there is no fear in doing so. And that’s the gospel.