August 2: The Tenth Sunday after Pentecost 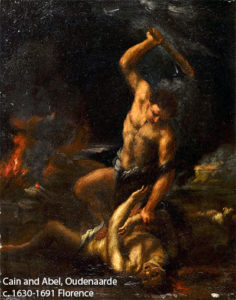 Now faith is the assurance of things hoped for, the conviction of things not seen. For by it the people of old received their commendation. By faith we understand that the universe was created by the word of God, so that what is seen was not made out of things that are visible.

By faith Abel offered to God a more acceptable sacrifice than Cain, through which he was commended as righteous, God commending him by accepting his gifts. And through his faith, though he died, he still speaks. By faith Enoch was taken up so that he should not see death, and he was not found, because God had taken him. Now before he was taken he was commended as having pleased God. And without faith it is impossible to please him, for whoever would draw near to God must believe that he exists and that he rewards those who seek him. –Hebrews 11:1-6

The first verse above definitely appears in the Solid Gold, Top-40 Scripture Memory Pack. Where else in the Bible do you get a dictionary-type definition of faith? Interestingly we see that there are two things that go together: faith and hope. Faith is the key asset that the original audience needs. It is closely associated with hope. If faith is looking to God and trusting Him for everything (including faith itself!), then hope is looking to the future and trusting God for it as well.

I meet lots of people who have hope. Hope is often thought of as having a positive or optimistic outlook. Sometimes it’s a general presence of mind that our family of origin may have fostered in our upbringing. For Hebrews, though, faith is defined in relation to hope. It’s one thing to have a hopeful outlook, but faith underneath it is where assurance is found. I hope for a perfect world; I hope for a new body and life beyond the grave; I hope for the day when everyone knows and loves Christ’s dominion and all His enemies are made His footstool. But I’m not left with a general sense of a personal force for good in all this; no, I believe in the God we know in Jesus Christ and that’s where conviction is found. Faith is not the same things as hope, but it is the assurance of things hoped for.

The writer mentions something about creation: we understand that the universe was created by the word of God, so that what is seen was not made out of things that are visible. How do we get this? By faith, he says, we understand. So we can see that the theology of hope and the theology of creation are related. That said, it seems to be enough theology for the writer and his readers, at least for the moment, and he “brings it home” through the rest of chapter 11, into chapter 12, with the stories of others who lived by faith, which undergirded their hope.

Enoch is found to be quite a popular figure in Jewish writings from a handful of centuries immediately before and after Jesus. His very unusual escape of death is doubtless intriguing! Many of the writings concerning him were speculative, but not so for Hebrews. The writer simply says what Genesis 5 says: Enoch pleased God.  I want that, don’t you? Thankfully, we’re not left to our own imaginations about how that might come about. We find here that without faith, it is impossible to please him, for whoever would draw near to God must believe that he exists and that he rewards those who seek him. That’s what Enoch had and did.

And so now just before the writer takes us through the epic drama of heroes and heroines of faith, he challenges us with the faith that sees creation and thus worships the Creator. It sees death and finds promise of new life ahead. It sees that God exists and, trusting His promises, knows of the lavish rewards for those who seek Him. And that’s the gospel.